Every fly fishing product from wading boots to sunglasses came under the scrutiny of anglers who actually have the opportunity to use, wear, and test the items for the 2022 Consumer Choice Awards, announced the co-sponsors: The Fly Fishing Show, Fly Fusion Magazine and the industry publication Angling Trade.

The nominations were open to all Fly Fishing Show Exhibitors with 32 “Best-of” categories.

The Best on Show award-winning Abel ROVE model reels feature a structurally integral machining design to withstand the demands of the traveling angler; caged frame to prevent any possibility of line being caught between the frame and spool; double pawl engagement on all sizes; quick change spool; user-convertible drag system; and high capacity, large arbor spool for single or two handed rods among other features.

END_OF_DOCUMENT_TOKEN_TO_BE_REPLACED

For the last two decades, anglers have been part of the hardfought effort to stop the formerly proposed Pebble mine. The proposed open pit copper and gold mine was slated for the headwaters of Bristol Bay, Alaska, home to the world largest sockeye salmon fishery and a crown jewel in the sportfishing and hunting industry.

In 2020, the key federal permit for the proposed mine was denied to the Pebble Limited Partnership as the proposal failed to meet Clean Water Act standards and was “contrary to public interest.” Now local fishing business owners, tribes and commercial fishermen are calling for permanent protections for the region to ensure Pebble- or another mining company- can’t come back in the future.

The national fly fishing industry as well as outdoor industry leaders, companies have stood behind local sportfishing leaders in Bristol Bay during the fight against Pebble and now in the effort to advance permanent safeguards for the fishery and the industries who depend on it.

Each pair of Special Edition Devil’s Canyon boots will feature: 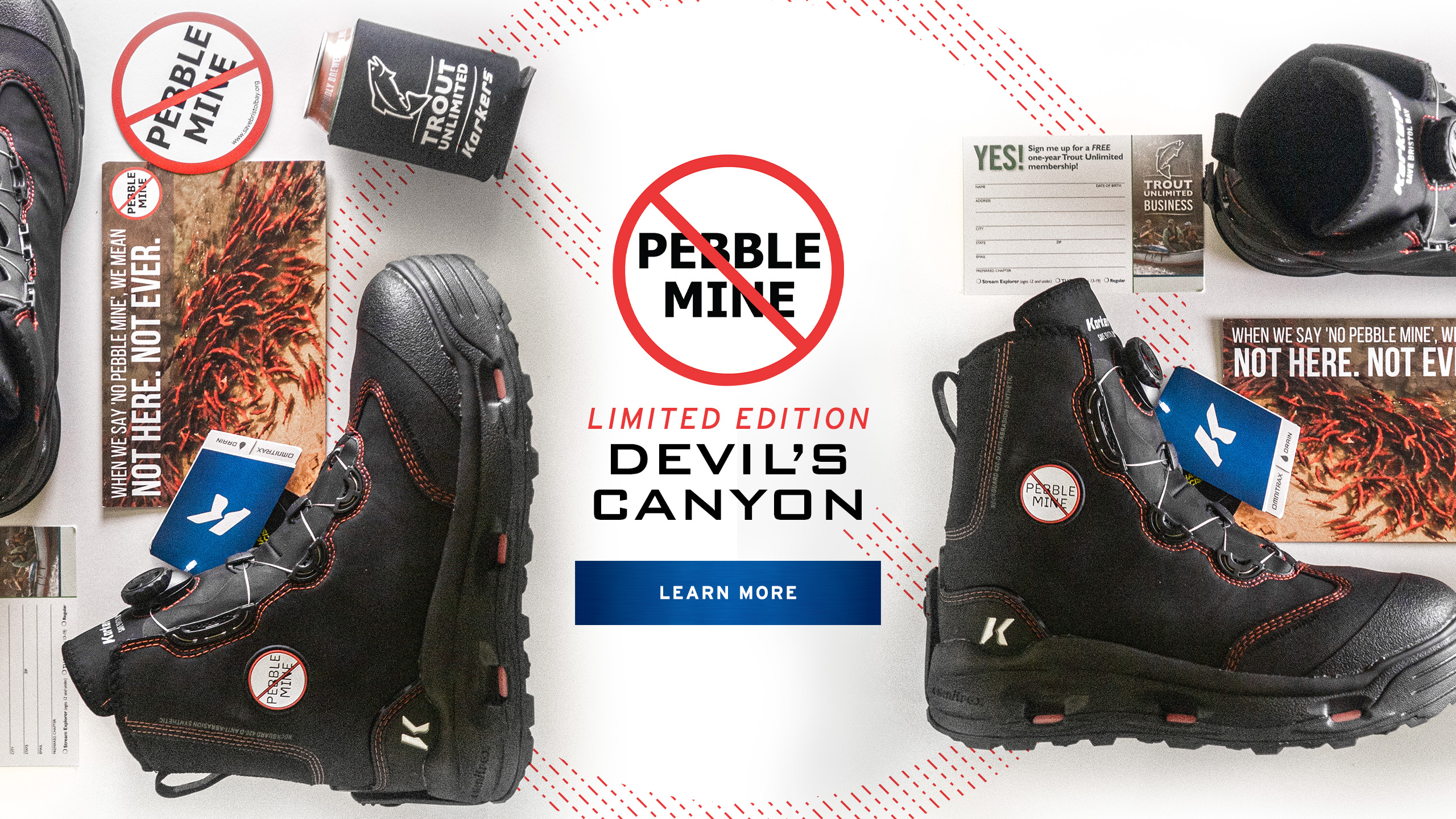 Ok, we admit it – our Tie Craft desk gets quite a few more miles than that of a tying desk.  When Drew sent us this beauty, everyone in the office was fighting over it for their daily work space.  Ultimately, it has been claimed by Kaylee…who is clearly “kind of a big deal”.
<br>
Not only is Drew’s craftsmanship stunning (seriously, the man is an artist!), it is so incredibly functional.  As a tying station, there is organizational space days.  This particular live-edge desk is a whopping 3’ x 5’,ensuring there is no shortage of desk-top space to spread out materials.  Every desk is one-of-a-kind, embracing every knot, and unique detail of the wood that is carefully selected for the piece.
There are several models of desks and stations available and if you don’t see the one you have been dreaming of, just reach out to Drew and he will bring your vision to reality.  And, don’t worry about shipping, ours arrived without a nick after travelling all the way through customs and up to our corner of the Rocky Mountains in British Columbia!
These desks will make for an especially personal gift that will last a lifetime!  Visit Tie Craft online to choose your model today! 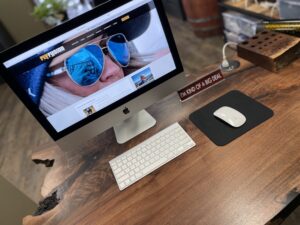 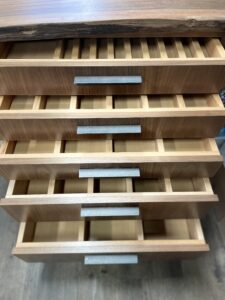 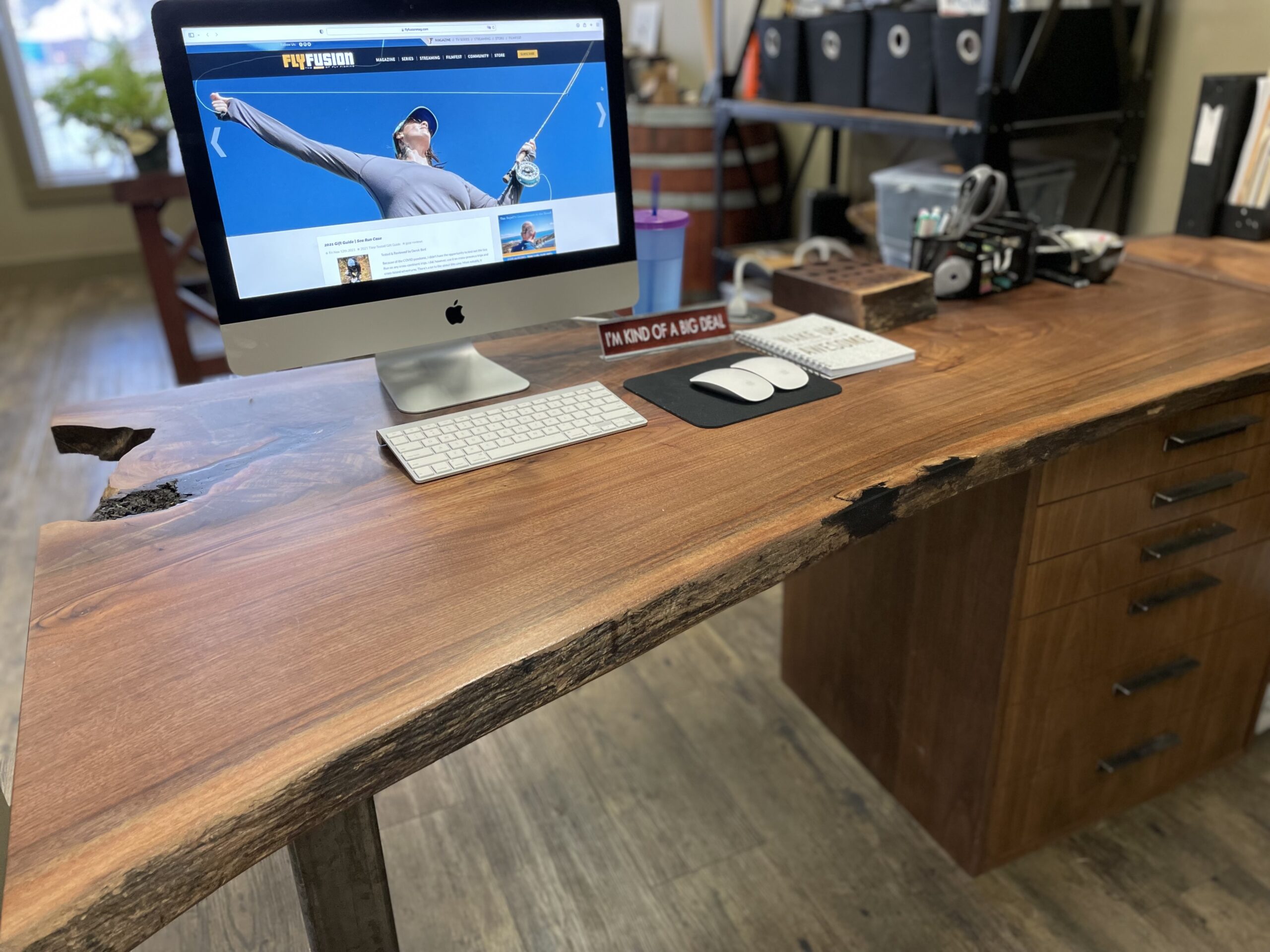 If you have been looking for a one-of-a-kind gift or maybe even a unique treat to add to your fly gear, look no further!  John Noble, who has a background in automotive painting has turned his artistic passion to airbrushing…specifically some fishy designs.  It almost feels wrong to bring this piece of art to the streamside but these tubes are as durable as they are beautiful.

Choose from a dozen fish themed designs for your rod tube, Yeti Water Bottle or mug.  Don’t see the exact design you had in mind?  Just reach out to John and he can bring your idea to life!
scalydesigns.com 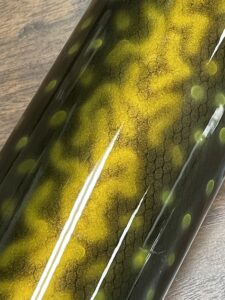 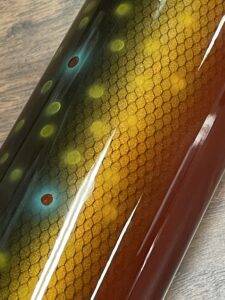 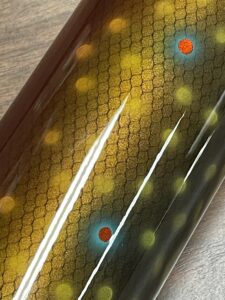 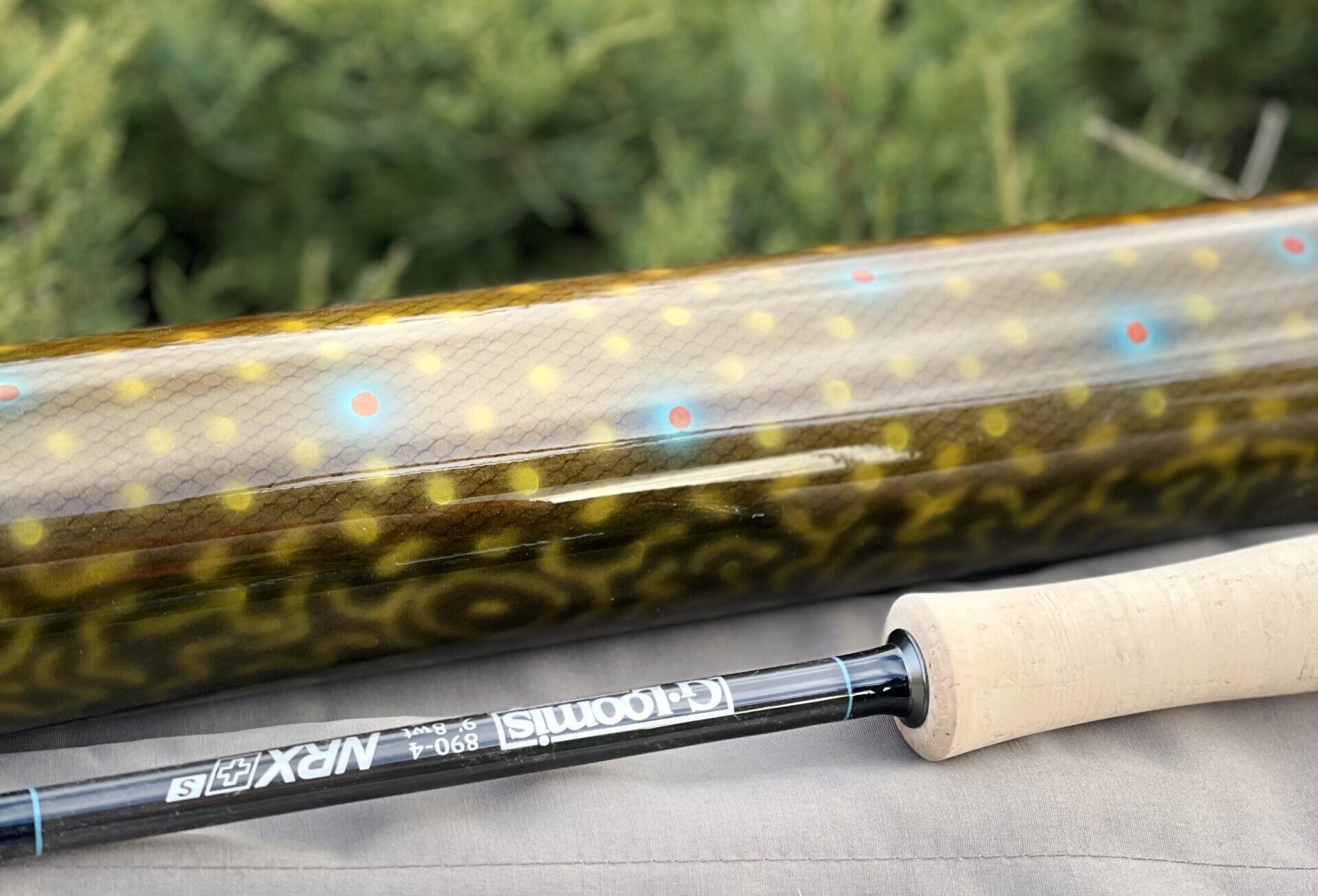 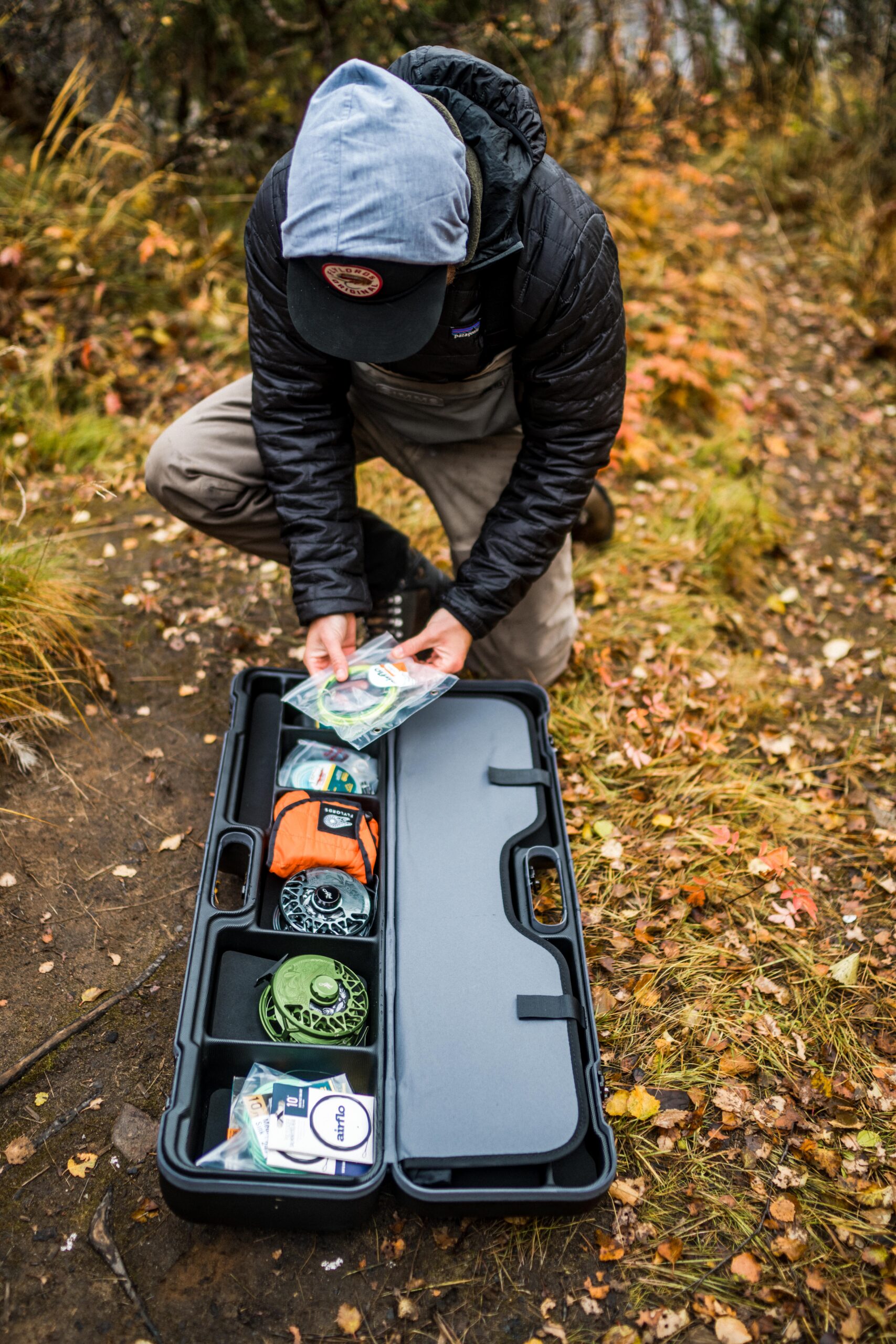 Because of the COVID pandemic, I didn’t have the opportunity to test out the Sea Run on any cross-continent trips. I did, however, use it on cross-province trips and cross-Island adventures. There’s a lot to like about this case. Most notably, it provides a level of protection for expensive fly-fishing gear. The case has a strong outer shell and ample padding on the inside. There’s room for multiple reels and a number of rods. I often stored four 9-foot 4-piece rods and had room for more if needed. The Sea Run helped to keep me a little more organized through the summer months, and on family trips the case provided me with peace of mind. Apparently, when it comes to storing gear in a trunk packed with luggage, not everyone fully grasps just how important dad’s fly rods actually are to him. For those who do comprehend how valuable the contents of the case are, the Sea Run integrates a convenient locking system. For me, the Sea Run was an unexpectedly impressive product.

Check out the full line-up online! 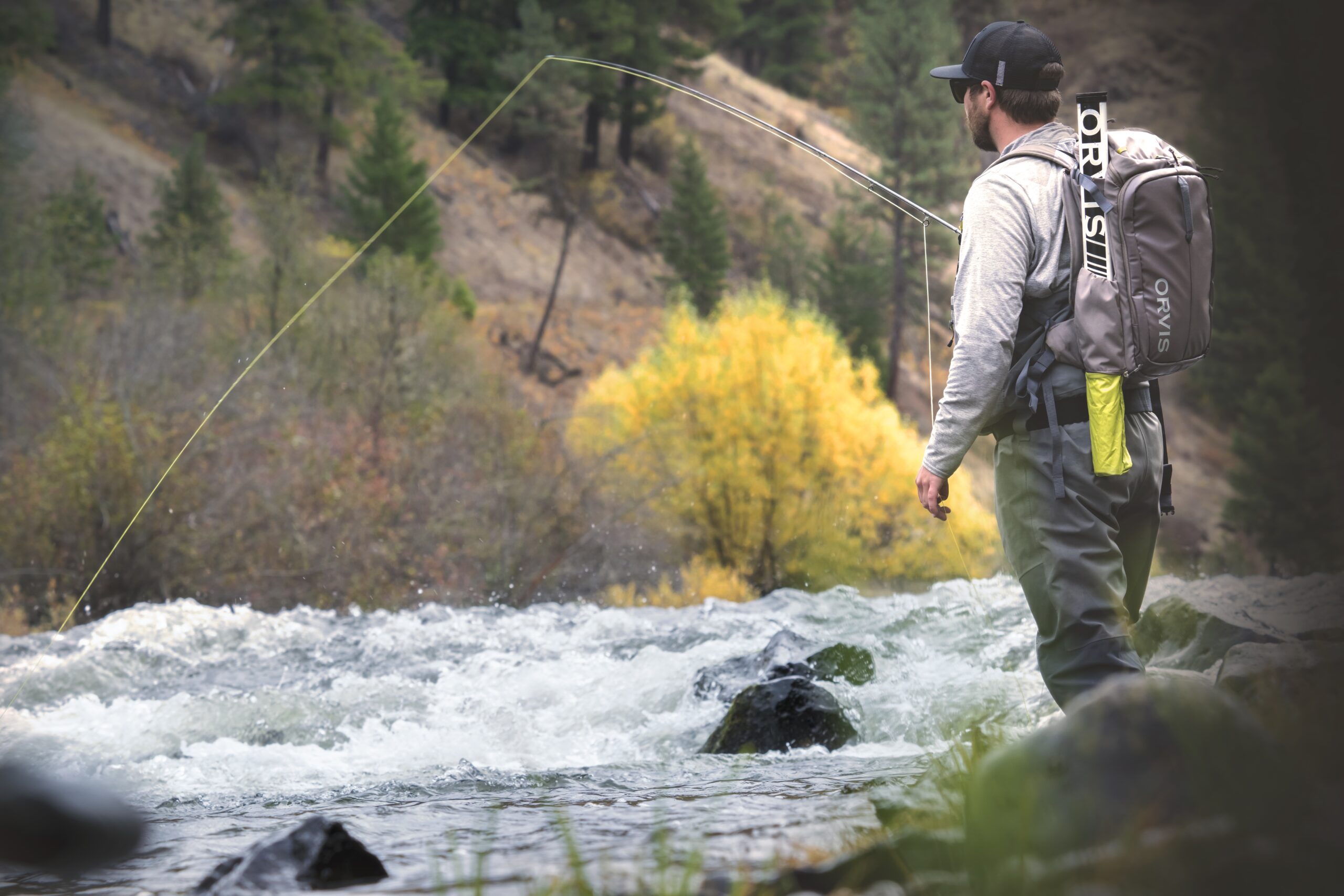 It’s tough to impress me when it comes to backpacks. I want a pack that can do it all and be comfortable enough that you forget you have it on. The Bug-Out backpack went with me on the water but to test its functionality also went on buses, under car seats and along for my regular commute—10 miles by bike and 45 minutes by train. Through it all the CORDURA ECO Fabric, a best-in-class polyester made out of recycled consumer wastes, proved to be extremely durable. At first the 25 litre capacity seemed cavernous, but after I compartmentalized the bag with the provided Velcro dividers, I appreciated how organized I was able to keep my gear. Yes it is designed for fishing, however, if needed you can get some work done between hatches as it also contains a laptop sleeve and an assortment of other pockets to hold whatever else you need to get from A to B. What’s best about the Bug-Out is the intelligent design. The large access panel on the side is perfect to get at the bag’s contents without having to remove the thing from your back. This is most useful when waist-deep in a stream, but that function could also come in handy at the airport; the Bug-Out doubles as a perfect carry-on bag. More slick components include the water bottle holder which unzips to allow an extension for a fly rod, an expandable net sleeve and attachment points for multiple chest pack options. Taken together, you’ve got a pack that is versatile and utilitarian. The Bug-Out not only impressed me, it has quickly become my go-to fishing and commuting pack.

More information about the Bugout Backpack can be found online.

Full disclosure…I’m a Tacky fan. I like the guys who created the box, and I’m impressed with the way their boxes house my flies. A number of years back the Tacky team saw a need in the fly-fishing industry and discovered a truly innovative way to meet that need. I can fully understand why different companies want to work with them and was pleased when I learned that Fishpond was collaborating with Tacky. The Pescador is everything you’d expect when two all-stars in the industry team up to create a sturdy, waterproof fly box. I filled my Pescador with mostly smaller streamers for coastal cutthroat and Coho, but the box is just as well suited for bushy dries or nymphs. On the river I didn’t have to invent situations to test out the waterproof nature of the box. I’ve been known to drop a box or two in the river, and this summer was no exception. The times my Pescador got wet, my flies remained dry. I even managed to drop the case on the rocks without incident—the box didn’t crack or pop open; no flies were spilled. I figure no water in, no water out, so when I got home after a day of fishing wherein I’d used the box extensively, I opened it up to dry out the flies I used. I enjoyed testing the Pescador this summer. It’s a well-built and intentionally-designed fly box. 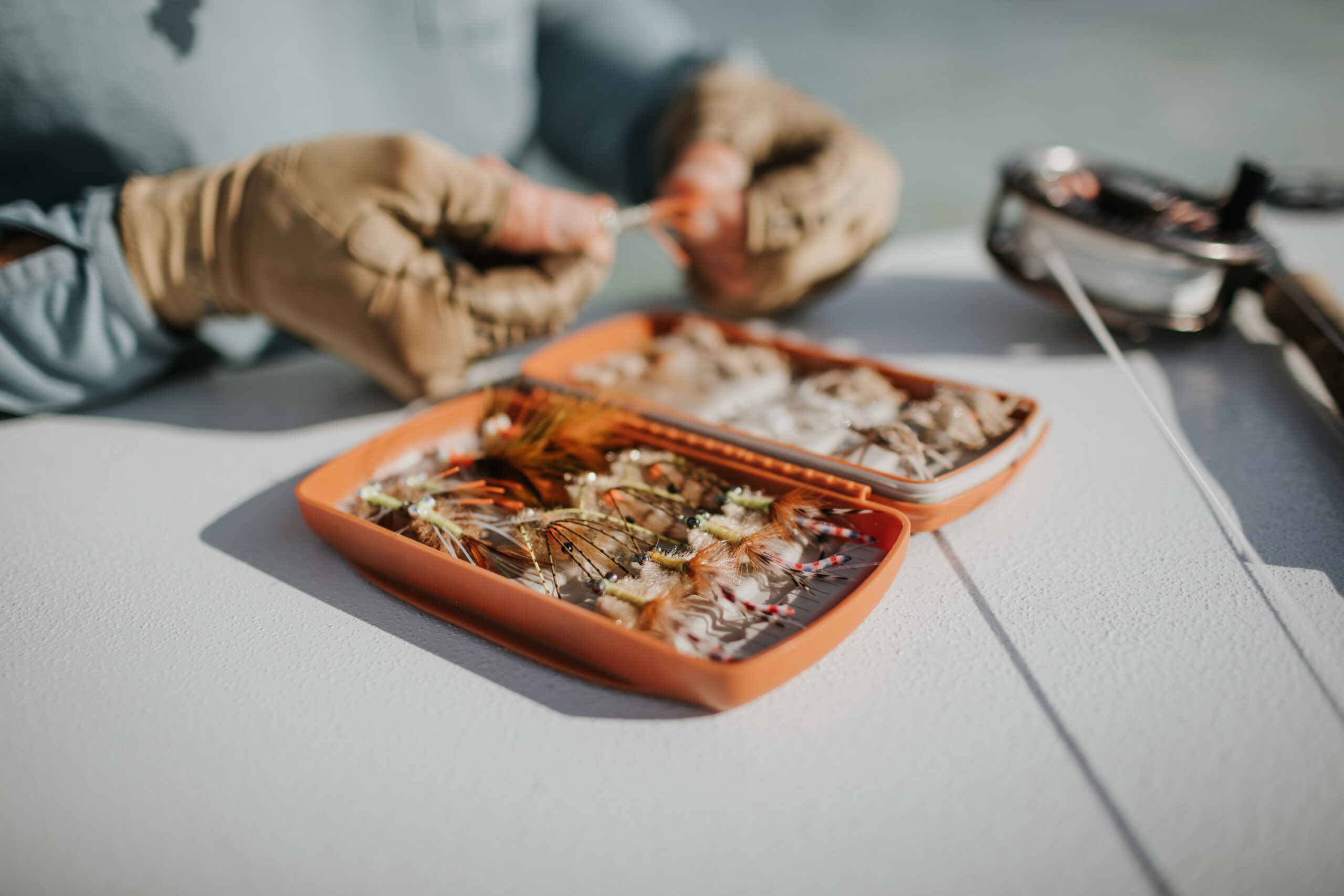 This cooler caught my eye immediately, because the outside is made of waxed cotton – that beautiful earthy fabric made famous by companies like Hardy, Barbour and Filson. Waxed cotton? For a cooler? Yes, and if that makes it an analog cooler in a digital world that’s more than okay with this decidedly analog guy. And, it’s the best cooler I’ve used. I don’t know what Fishpond puts between the outer and inner layers, but this thing keeps drinks very cold all day with just freezer packs; no ice required. There’s also a small, handy trap door on top so you can reach in to get a cold one without letting the cold out. It accompanies me on all outdoor adventures.

All the specs and features can be found at online fishpondusa.com 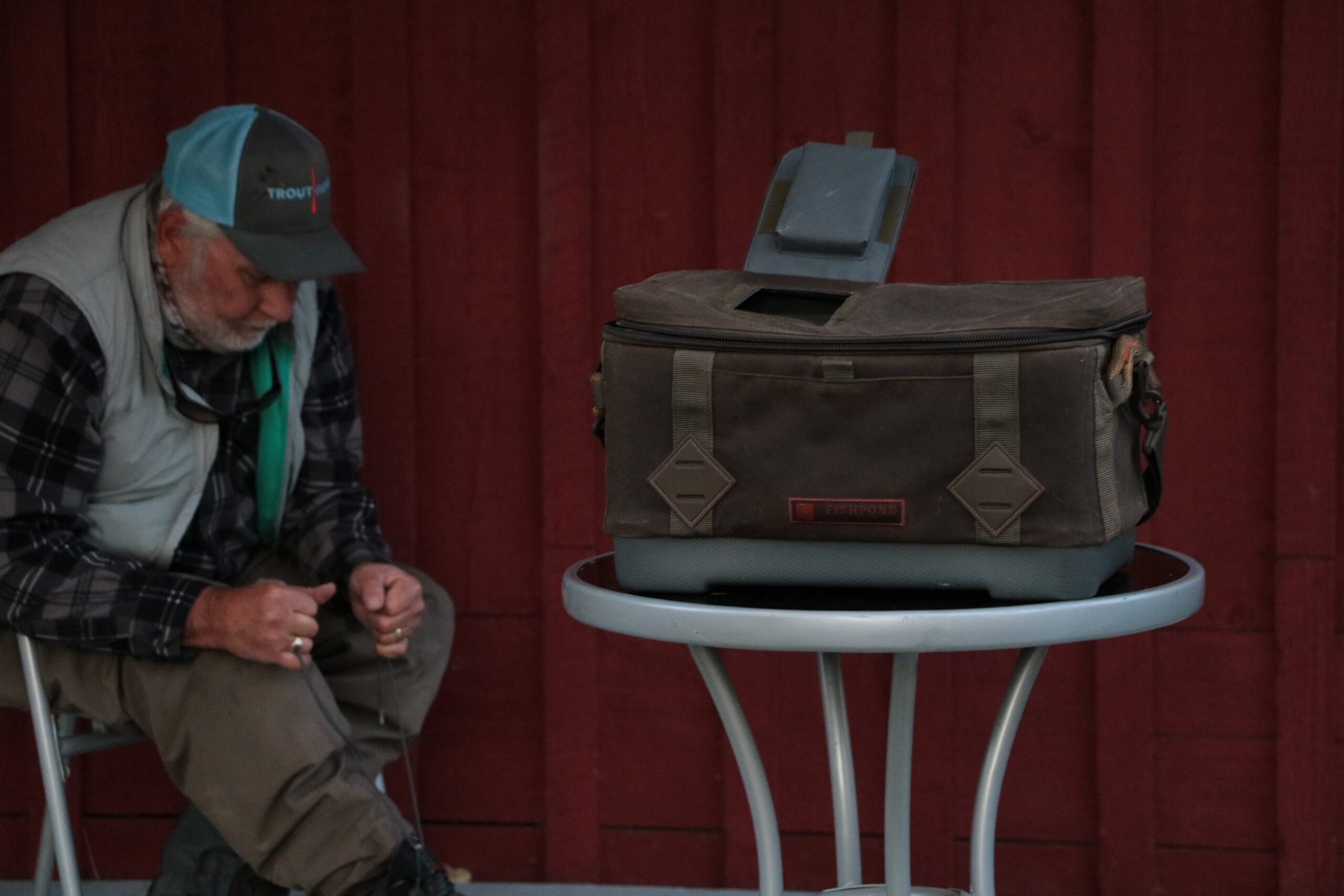 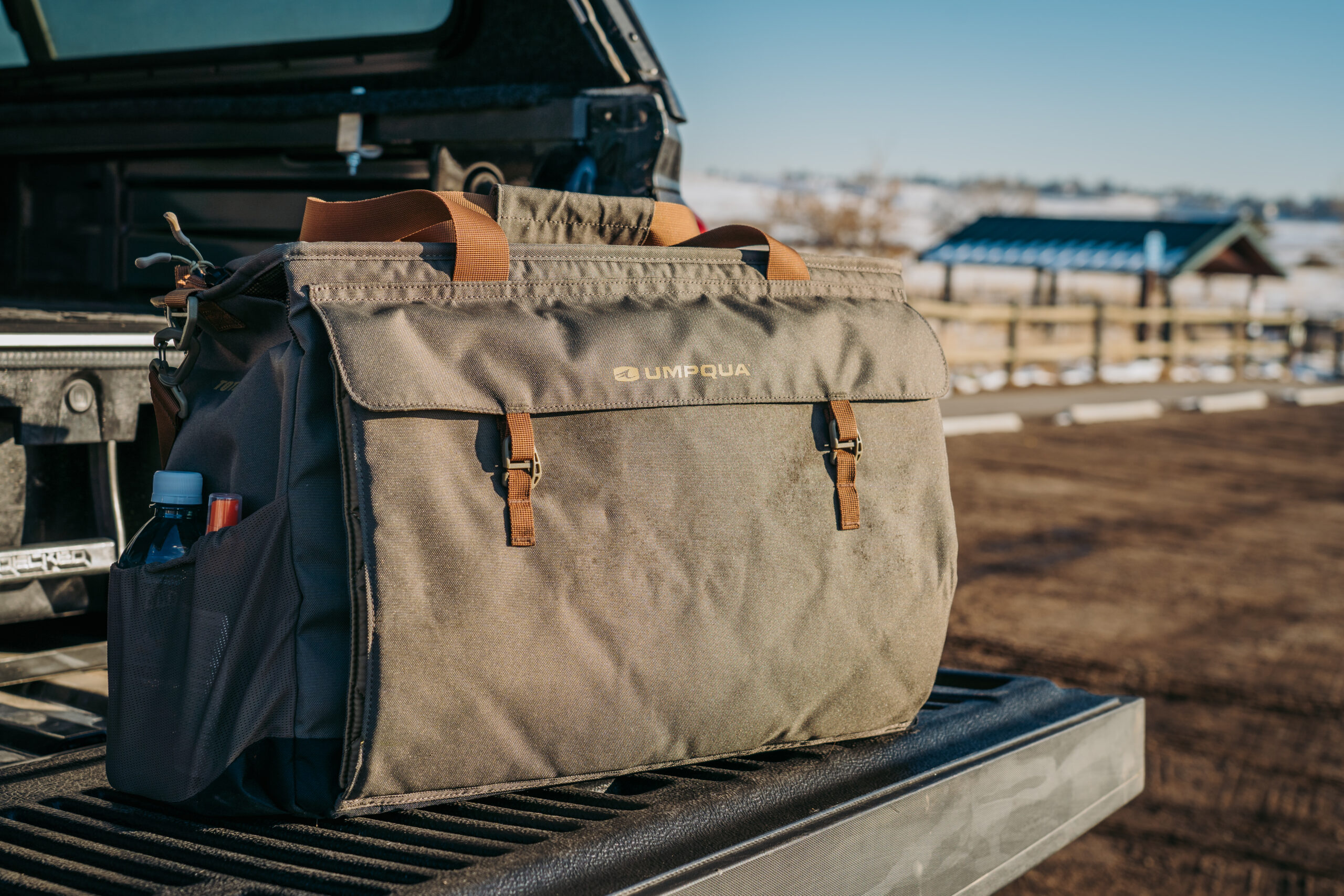 Rods are gorgeous, reels are exquisite, waders are rad, so it was a bit surprising to me that one of my top choices of gear would be a tote bag. However, Umpqua’s full-featured ZS2 Wader Tote just makes fishing better. The 22’x16”padded stand station makes gearing up very civilized and the fact the tote holds your boots, waders and accessories (even rod tubes and a net when stowed) means when the bite is on, you just grab this thing and go. Having a place to store wet, mucky waders and boots post-wade meant I kept the back of my car clean and dry and flat pockets make arranging other essentials a breeze. Get organized and more efficient with this 45 L tote. Like it did for me, it’ll surprise you how much it enhances your angling experience.

A good rod doesn’t need to be expensive or flaunt unnecessary technology no one can identify. It does, however, need to be the rod that you reach for and don’t think twice about when fishing. The Sage Sense is that sensible nymphing rod. This was the primary rod I reached into my quiver for this season. Most days, I deliberate on which rod will fit the particular style of fishing we are embarking on. Not so with the Sage Sense. Not once did I question its ability or utility, instead I focused on the river and what flies might bring up a fish. My home waters are the medium to small streams of Central Colorado. The Sense fished them all well. As a nymphing rod, the Sense has relatively slow action and a soft tip, features designed to protect the light tippets nymphing anglers tend to favour. Sage’s well-established grip—snub-nosed, half-wells cork—feels comfortable and well-balanced in hand. The rod is subdued in appearance but strong in performance—all the better to high stick spooky fish in a run or a riffle. The Sense’s Generation 5 blank eliminates the tip bounce that many 10-foot rods can’t shake and most impressively it casts everything from thinner Euro-nymphing lines to traditional, heavier trout lines. I successfully fished everything from small multi-nymph rigs to larger dry-dropper rigs and small streamers. When you stack it against other mid-range rods, the Sense stands tall. 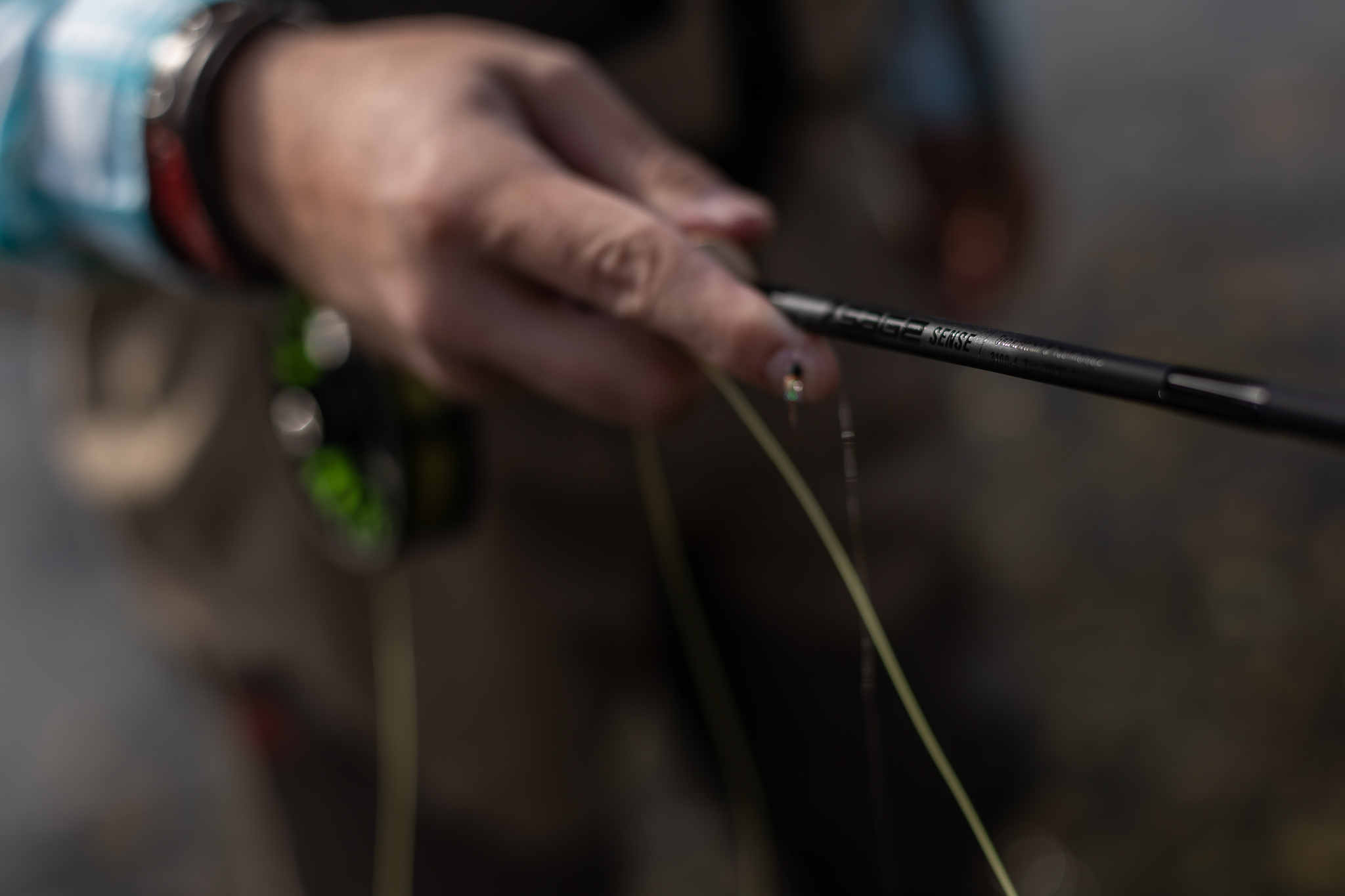