The wind whistles quietly, hinting at the onset of winter across the Blue Ridge Peaks, the sycamores reflecting over the freshwater creeks and river systems as they wrap gently through the barren hills. A  “gold mine” they say, home to the “fish of a thousand casts.” To those familiar with musky, these conditions signal the onset of the season’s most productive and rewarding pursuits when it comes to pursuing musky.

Somewhere tucked away in the backwoods of Virginia, is the fly guide who uncovered the magic of these rivers. For most, the little town of Troutville on the outskirts of the Roanoke wouldn’t warrant a stop, you won’t find it listed too often when you’re researching fishing destinations across the world, but to Blane Chocklett, it’s home.

An avid fisherman and pioneer in the sport, Chocklett made his mark on the fly fishing community with his persistence in developing and revolutionizing flies, testing them in the mountains of Virginia targeting musky. His most notable achievement may be his “Gamechanger” fly. This articulated fly pattern is built to mimic the serpentine movements of baitfish in the water. As the cold weather sets in, the allure of a swimming
“Gamechanger” moving through the water is the ticket to landing one of the giants on fly.

“Muskys are a cure all evils; they get in your head,” says Blane with a slight grin. “The fish of 10,000 casts, that unicorm out there. You can do it all right with these fish, and they’ll say, ‘See ya…not this time.’ They made me work for every single inch I got. For sure muskys are a fish that I will always cherish because they taught me so much.”

Chocklett has more character to him than meets the eye. His fly patterns hold stories of thier own. Hard-won dedication, frigid early mornings trailering drift boats up gravel mountain roads. Every strip of the fly line, every cast, every push and pull of the oar down the river have left their mark. Most folks say you can see stories in people’s eyes, but for guides, this sentiment holds most true when you look at their hands. The callouses, the easiness, and drive they apply to every strip of line, it’s second nature. There’s a seasonedness about him, he just gets it.

“Blane is one of the few… I’ve met, two or three people in my life when we talk about fishing we’re talking the same language” comments, Larry Dahlberg, a fishing legend in his own right and one of Blane’s mentors.

Unlike Dahlberg, who spent his career traveling the world for his TV show, “The Hunt for Big Fish” and innovating some of the most prolific lures and tackle to date, Chocklett has applied his passion for the water in his own hometown.

“When I was about 8 years old my dad took me trout fishing first time. Ever since that day, all I’ve ever wanted to do is fish,” says Chocklett.

The same childlike determination has carried into his guiding career today. Before the first light edges over the mountains, he’s loading the frost laiden boat smoothly, systematically. There’s an unseen precision to all he does, even in the small moments.  He relates it all back to his upbringing.

“Living in the sticks, there wasn’t a whole lot back then. We didn’t have all that stuff, so any little bits and pieces I could pick up was kinda the deal. Saturday mornings, I’d go stay with my grandmother up in town, so I could watch ESPN Saturday mornings. At that point, I was able to see Flip Pallet’s Walker’s Cay Chronicles. In between those, you would have Larry Dahlberg’s, “The Hunt for Big Fish.” In this particular episode, Larry was fishing for musky on fly rods. And when I first saw him do that I mean, I could do that here. That’s kinda set the course to where I am now.”

The sleepy, little town was his whole world and the backwoods of Virginia became the stage for his most epic adventures. Most don’t have that kind of imagination or persistence, to see the world right in front of you as wide open as the Bahamian flats, but Chocklett did. And that mentality went back to what Dahlberg would teach in his shows, to keep an open mind and see what happens. The determination to see it through, to maximize the resource right in front of him, and care for it, that’s what makes him great.

Many years have passed since those days and as Chocklett’s hard work and determination as a fly guide in his own backyard paid off, he developed a friendship with Dahlberg that has gone far beyond the days they have spent on the water.

“What we do share is we both have an artistic mind a mind that’s always wanting to know what’s around the next corner and what can we do because the fish didn’t eat. This particular fly or this particular bait, what could we have done to trigger that fish to eat that. And I think that’s what always haunts Larry, and I know that’s what haunts me. So, I think we share that and that’s some kind of bond that I think he appreciates and I know I do,” comments Blane.

“I’ve been very fortunate to meet all my heroes in fishing and by far Larry is head and shoulders above all of them.”

In many ways, Dahlberg’s own ingenuity and passion for always creating a better way are reflected in Chocklett. Dahlberg is renowned for pioneering new innovations in fishing technology including his lure, “Mr. Wigley.” When you watch the way “Mr. Wigley” and Chocklett’s ”Gamechanger” move in the water, there’s no doubt they’re speaking the same language to the fish.

Blane expands on this thought,

“The “Gamechanger” is a culmination of a lot of failed attempts at creating a fly that would look and swim like a real fish. It’s really like an imitation of what Larry created with his “Mr. Wigley” that has these serpentine movements. Random, non-mechanical actions are the things on that type of bait that we’re looking for. That’s what makes it magic.

I wanted the “Gamechanger” to do all that kind of stuff and “Mr. Wigley” pretty much is what that is.

Someone asked me about it, and I said it’s going to be a game-changer for me in my guiding in my life. They said, ‘That’s what you should call it,’ so that’s what we called it.”

There’s a calculated beauty to the way Dahlberg and Chocklett’s minds operate. It’s tactics, mechanics, and strategy married together to create a predictable art form out of a sport that lends itself to be wholly unpredictable. They study the water and the fish but there’s an easiness that flows out of them despite the highs and lows of a day on the water.

Reflecting on his own career, Chocklett notes, “With all the success I’ve had with my flies and design, it’s all a result of hard work on the water. I’ve never really stepped back and taken a look at what I’ve accomplished yet. I mean I’m flattered and definitely proud of what I’ve done but Tyler, adopting him, that’s the biggest thing I’ll ever do. He’s a five-year-old boy that’s wide open and the only time I have to say, ‘Stop, stop, stop! Quit, quit, quit!’ is when I have him on the water. That’s him, that’s when he’s home.”

Chocklett’s boy loves the outdoors. He might even rival Chocklett’s own passion at this age. With a captain’s hat, rod in hand, and waders, he doesn’t hesitate to march right in. Standing under his dad’s watchful eye, the cold air turns his cheeks a bright shade of pink and the excitement fills his eyes as he takes in the world around him. That’s where the real magic is.

Chocklett is careful not to push him, though, to let him fish when he wants or throw rocks if he’d rather. It’s about enjoying being out there and enjoying the same wild world Chocklett had to access to. “That’s how it should be,” Blane says.

It’s about passing on a love for the outdoors and giving the gift of seeing the world wide open like that. With all the accolades, Dahlberg and Chocklett both agree that passing on the ties that bind to the next generation is what it’s all about.

As the sun sets in Appalachia, Chocklett hoists Tyler up to give him a better view of the mountains all around and says, “But the cool thing is you know, Tyler has spent time with us here filming this. And to be able to look into the future when Larry and I are gone, he’ll be able to look at this and say, ‘Wow, that was cool.’” 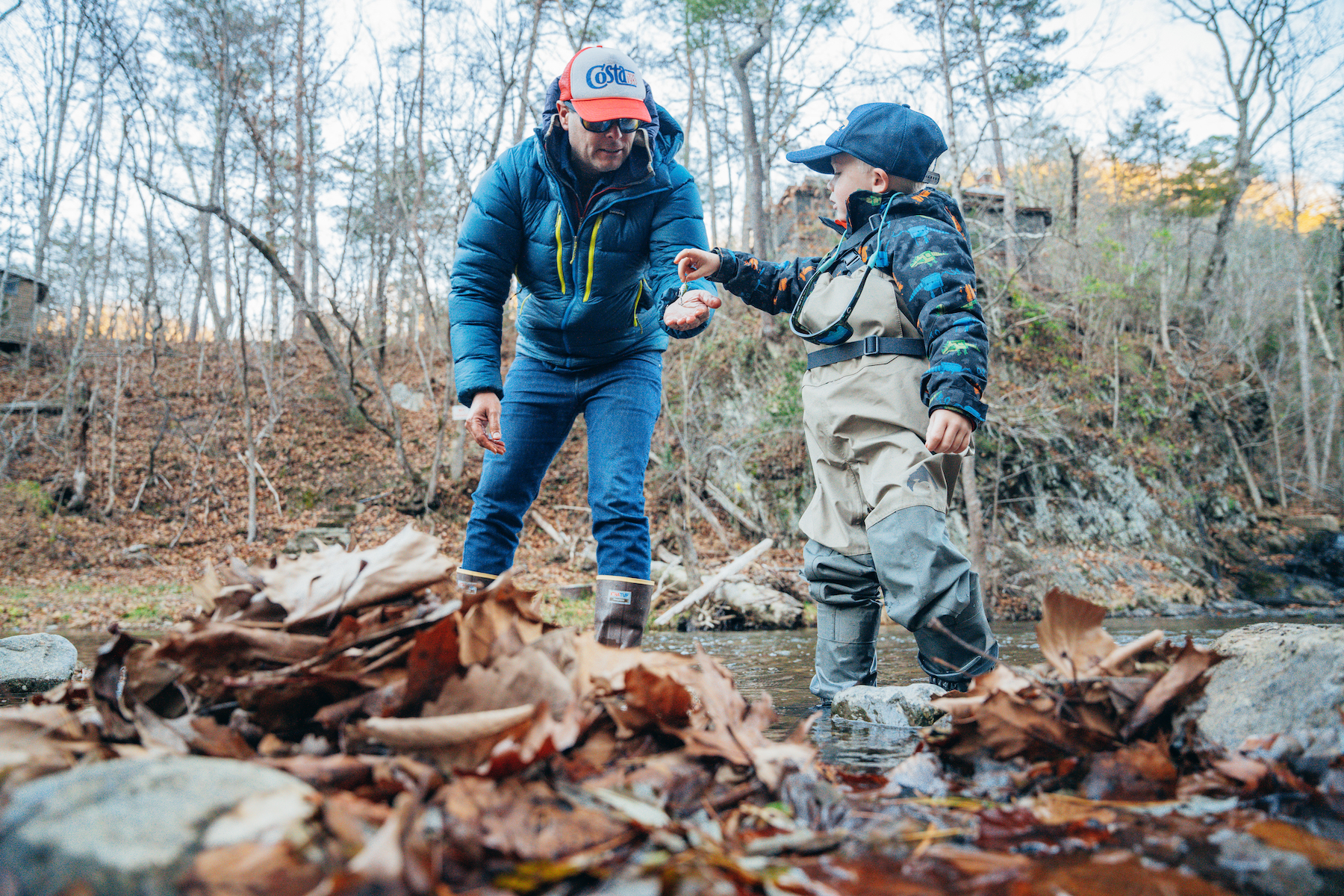