If you were lucky enough to have lot of days under your wading belt last season, inevitably, supplies will be running low; it’s time to refill the fly boxes. Surely you’ll want to restock the prince nymphs and the hare’s ears. The Copper Johns and pheasant tails will probably need replenishing. And don’t deny that you left a few stimulators, Adams and elk hair caddis streamside. But what about that fly you kept hearing about last season? That tiny thing the older gentleman across the lake was landing fish after fish on? That pattern that seemed somewhat enigmatic in style and apparently limitless in variation, size and colour? That hard-to-pronounce thing that you told yourself you’d get acquainted with next season?

Make sure to check out Dana Harrison’s Decoding the Chironomid in the Spring issue and then add these two patterns to your fly box! 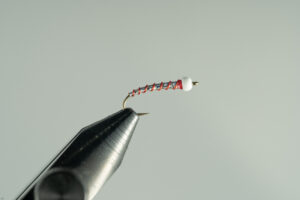 Snow Cones are a staple for chironomid anglers. They’re quick to tie and simple to spin up in an assortment of colours. The “snow cone” refers to the white bead, which represents the gills of the chironomid pupa. This pattern is spartan: often I’ll only use one colour of thread, along with a single wire. My personal favourite is the most simpleSnow Cone of all: just some black thread and silver wire. 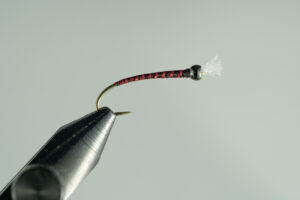 The Bomber is the Goliath of the group, the final boss of chironomids. Often tied on large hooks (size 8 or 10 extended body), the Bomber can be tied in a variety of colours, but I have found it to be most effective when tied with a black body with a red flash rib. This particular pattern is extremely effective in the southern interior of British Columbia during the summer months.