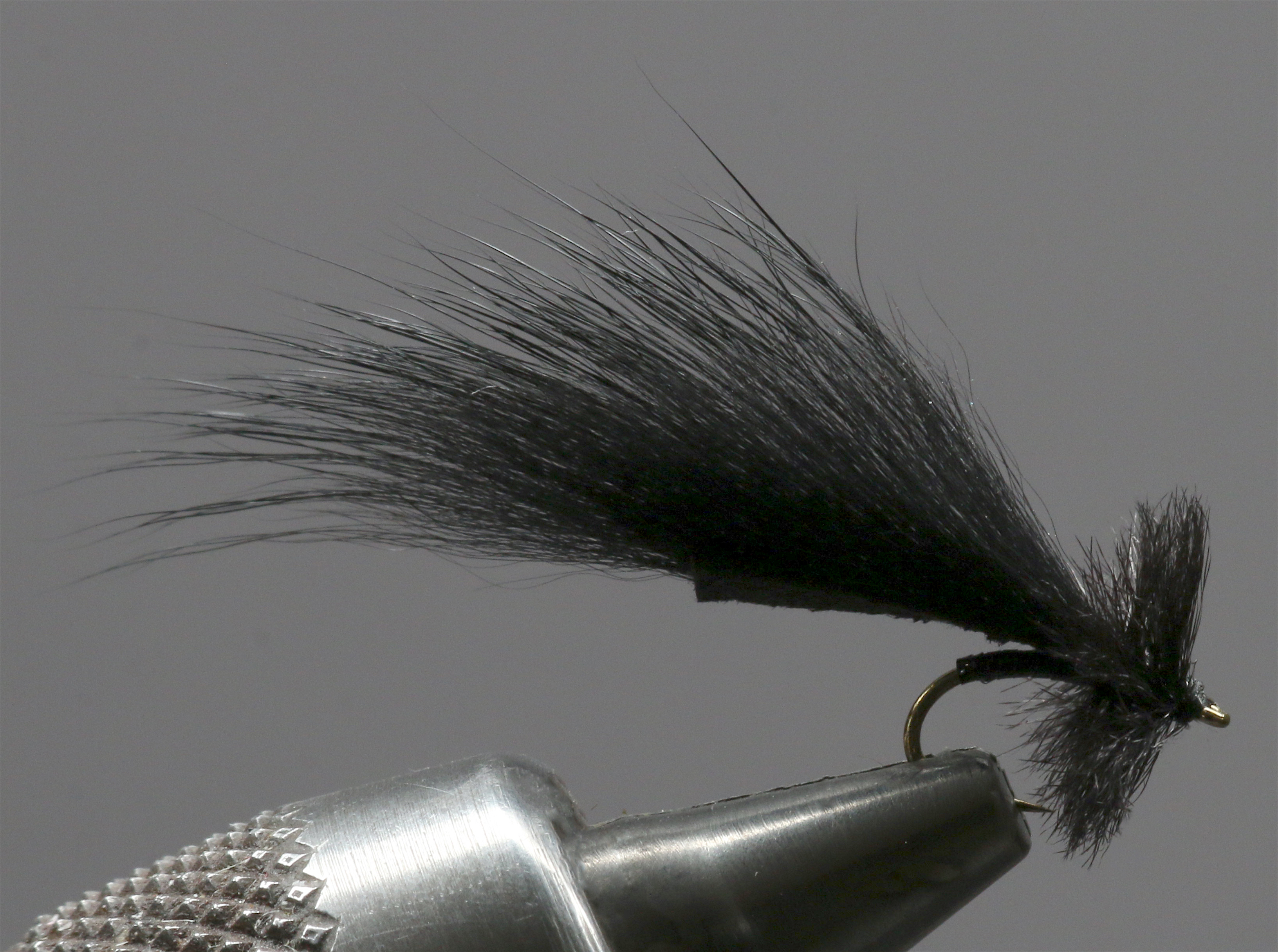 Leeches are an important part of a trout’s diet, especially in high water conditions. Similar to worms, leeches are swept off the river’s edge and bottom, supplying an easy food for the fish. While some leeches are large, exceeding one inch, there are many that are less than an inch long, making the common two-inch leech patterns un-productive in many circumstances. I designed the Mayer’s Mini Leech to match the small freshwater leeches that trout feed on in freestone rivers, tailwater streams, and stillwaters. With micro pine squirrel attached only near the eye of the Tiemco 2488 #14 or16 hook, the extending material constantly moves as does the ostrich herl collar. A Krystal Flash body adds a little shine as the fly drifts and wiggles.

This fly is also versatile. You can dead drift it like a nymph, swing it as a nymph, trail it behind a larger streamer using a stripping retrieve, or even hang it below a hopper. The constant pulsating and undulating action matched with the tapered profile of a real leech will fool many trout, bass, and carp. It is my go-to pattern for landing large trout in the tight quarters of undercut banks, around structure, and at the heads of drop offs or riffled runs.

What makes this design universal is its ability to match so many food supplies other than just leeches. Use it in a ginger colour to match dead, floating flesh in the salmon-rich waters of Alaska. Use it in olive, rust, brown or tan to mimic drifting vegetation that is packed with bugs or crustaceans. Finally, in natural colour it can match the darting fry and baitfish along the river’s and reservoir’s edges.

When nymphing the Mini Leech I prefer to connect this fly either with a tag end from a triple surgeons knot as the lead fly and trail a second fly off the remaining tag end, or as a trailing fly when connected to the second piece of tippet attached at the bend of the hook on the first fly. The first fly is weighted and the trailing leech is unweighted to maximize movement. As part of a hopper-copper-dropper set-up that good friend and mentor John Barr developed, I replace the last fly with a leech. This allows the trailing leech to swing and wiggle while the large dry gets the trout’s, attention. In skinny water I simply drop the leech off the bend of the hopper hook using a two-foot piece of tippet and placing a micro-shot six inches above the leech to keep the leech itself free of weight, which maximizes movement.

I also like to fish the Mini Leech with a streamer. I attach the leech in front of a large streamer by tying a piece of 0X tippet to the bend of the leech and tying the streamer to that. I prefer this rig when I know I will be retrieving the flies. This makes it appear that a biatfish is chasing a leech, which can really turn on big trout. If I am going to dead drift my streamer or retrieve it slowly with pauses, I reverse the fly’s positions, attaching the streamer to the tippet and tying the leech to a piece of 0X or 1X that’s tied to the bend of the streamer hook.