When asked about their future careers, many kids give one of a few common responses: doctor, athlete, astronaut, scientist. But when I was a kid there was something different in my mind – something that’s still there. My thoughts were gripped by stories of harsh and unforgiving landscapes in Alaska and northern Canada. Secretly I dreamed of exploring wild, undiscovered lakes and rivers full of giant fish that took my flies freely. My heart ached to search out places untouched, unspoiled and un-fished.

My parents were more understanding than many and encouraged me to spend time in the outdoors pursuing my passion for fly fishing, skiing and other sports that involved adventure. Dad had spent his youth riding dirt bikes and wasted no time in teaching his sons to ride, and by so doing provided a means of ultimate freedom for three young boys. Summers were spent throttling around Montana’s backroads on two-strokes, pushing one another to find new places to ride. My two older brothers soon discovered other interests, but the dirt bike remained my link between the 3-weight rod and the blue lines on a worn map.

Not much has changed. I still pore over maps and search out locations that are far-off, likely un-fished and rarely visited. So, it was really a no-brainer when Kristjan and Gunnar invited some friends and me to come to Iceland and fish a river they had been scouting for years. The river was accessible at only a few spots due to steep canyon walls, and they knew it held brown trout and arctic char, but were unsure what the majority of the river truly looked like.

The Kaldakvísl River lies in a valley of moonscape, seemingly barren of life. It was once placid and calm, but is now guarded by sheer canyon walls formed when tectonic plates split along the streambed and created a new section of river.

We discussed our approach for months and agreed that floating that section was the best option. We carried ropes to avoid waterfalls and other hazards along the way, and to hoist the raft up along a collapsed canyon wall at the end of the trip.

Upon arrival in Iceland we walked the canyon before launching, scouting for unseen hazards that might not be on the map. We made a game plan and put the rafts in below a massive series of waterfalls. This was a serious commitment, as once we started there was no easy way out.

The test was really how many fish we would find and how willing they would be to eat flies. The river snaked its way through the steep canyon walls, each bend creating a deep pool. The fish seemed to be congregated in certain pools, some holding numerous fish, and others, although appearing perfect, were void of life. In the “good” pools we watched with awe as fish attacked the first flies they had ever seen.

My mind kept returning to youthful dreams of harsh landscapes in untouched corners of the fishing world. This place was beautiful beyond belief: basalt columns rising along the edge of the water, canyon rock covered with moss; a no-man’s land uninhabited by any wildlife other than the trout hidden below the disheveled surface of the water.

There are times when watching someone else fish is as enjoyable as fishing yourself, and this was such a time. As we moved downstream, each member of the group took a turn at making the first pass through a run. In a few pools the rest of us climbed to a higher vantage point to spot fish and call shots, belly-crawling to peer over the edge of the cliff. Watching motionless as a friend cast to the other bank was the equal of any adrenaline-pumping sporting event. The browns held deep in a calm section of water and shot off the bottom, racing to the fly at top speed.

One fish in particular stood out above the others. It was not the largest fish we saw, but it moved through the water with the complete confidence that only an apex predator can display. On six consecutive casts this fish rushed toward Cort’s fly, trying to obtain dinner. We shouted premature celebrations with every cast, thinking this was the one that would stick. On the sixth shot contact was made but ultimately the fish won the battle and sunk into the depths, never to be seen again. It didn’t matter; we had all experienced precisely what we had come for.

Exhausted, we hauled the rafts up the jagged volcanic embankment, watching them swing back and forth on the ropes. We had humbly and successfully explored and fished this section of river, and named it The Hidden. We hadn’t climbed Everest for the first time or done some other great thing. But we had fished the untouched waters of the Kaldakvísl. 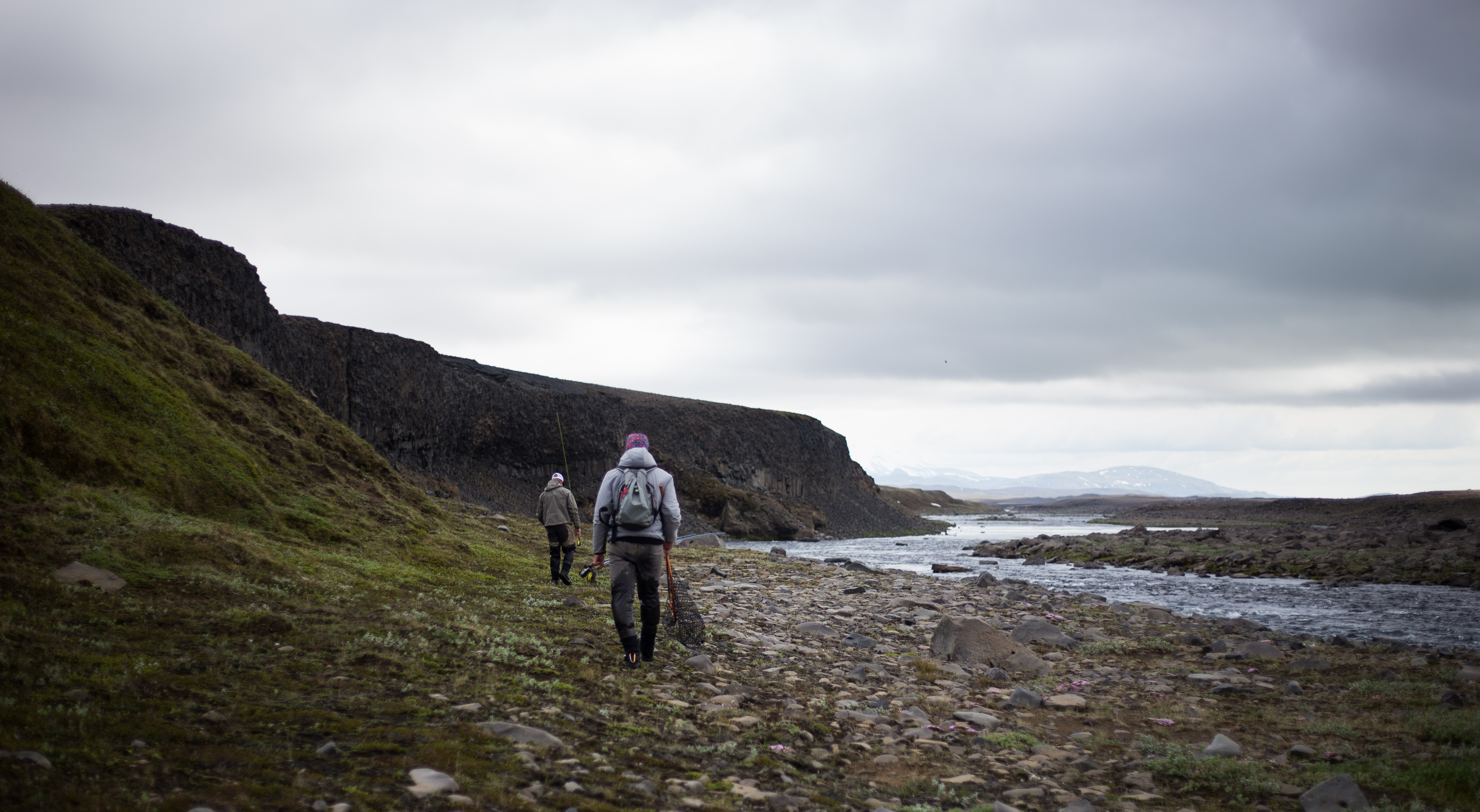