Fly anglers don’t always have access to in-depth bug charts when they’re out on the water, and sometimes entomology’s Latin terminology doesn’t stick all that well in the long term memory. One of Fly Fusion’s fly-tying editors, Al Ritt, provides a quick-reference entomology framework with ideas and patterns for anglers who want to go deeper and are looking for a good place to start.

A sneak peek recipe…please “Read More” for more recipes and to to read the full article. 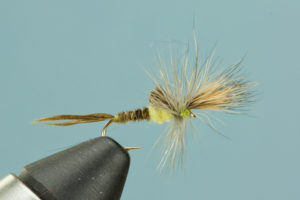 It had been an idyllic summer afternoon. But now my nap in the sun was over and the magic hour was beginning. I had noticed the first adults on the water 15 minutes earlier, but it took a few more minutes before the first noses appeared. Now I was positioned to present my fly to the pod of trout that was clearly ready and waiting for this hatch. Following several drifts that attracted no attention I paused for a minute to think. Maybe my drifts weren’t quite a drag free as I thought, or maybe the fish were leader shy. This was a heavily fished spring creek known for it’s prolific hatches and difficult fish. I repositioned to get a downstream presentation and tried again with similar results. I kept at it and did manage to get a few fish, but it was not what I had hoped for. Especially given the number of bugs on the water and enthusiasm with which the fish were eating.

I began fly fishing when it was still in vogue to find a stretch of water with some room between me and any other fishermen. Before entering the stream or casting it was accepted practice to find a comfortable spot and watch the water. Try to find where the fish were at the time, what they were doing, and what feeding opportunities there might be. Frequenting waters with regular and prolific hatches this worked well – most of the time. But on days like the day at the beginning of this story it could be frustrating. Seeing so many opportunities go by without a proportionate amount of success was hard to take.

As I gained experience I realized many times waiting for a hatch could be hit or miss, but it wasn’t the only way to catch fish. I took a lot of classes at the local fly shop trying to improve my fly-fishing skills: casting, general fly fishing, fly tying and eventually an entomology class for fly anglers. The entomology class opened important new doors. One of the first things we talked about in the entomology class was that you don’t need to have a PHD and know every Latin name to benefit from an understanding of basic aquatic insect life cycles. The second major point I took from the class is that there is much more to the life of an aquatic insect than just what we see above the water. In addition to the dun (the newly developed adult) and the spinner (the post egg laying, or dying adult), there is the egg laying stage which fly fishers generally call a “nymph” or larva and the emerger or in some cases the pupa. Besides these typical life stages you may also experience cripple emergers or adults as well as egg laying adults which either sit or skitter along the surface while laying eggs or actually dive to the bottom to deposit eggs before swimming back to the surface.

Why is this important for us to know? Well, if you’re a dyed in the wool dry fly only angler perhaps it’s not. If you are dead set on only fishing dry flies, all you need a basic time frame for when your local hatches occur and the knowledge of which bugs you may encounter. If you want to maximize your time spent fishing and the number of fish available to you, a little knowledge of the life cycle of each insect means you can experience the entire life of the bug in a day’s fishing.

This may sound interesting, but it’s also the point where many fly anglers and fly tiers shy away – the entomology. But it really doesn’t have to be complicated. Most insects have pretty similar life cycles. Some, such as mayflies undergo what is called an incomplete metamorphosis, while others, like midges and caddis flies, undergo a complete metamorphosis. You may find this interesting, but if you don’t you can ignore the terms completely and still understand life cycles. Let’s walk through a typical cycle and what stages you may or may not experience.

All aquatic insects begin as eggs. These are not important to the fly tier/anglers. The first stage we will find useful is the nymph or in the case of midges and caddis the larva. Immature insects spend most of their life in this stage. The nymph or larva will molt several times as they grow. Some will remain as nymphs/larva for days, while others will mature over multiple years. When the insect is mature most progress to a stage we call an emerger or pupa (for those that undergo a complete metamorphosis). This stage is when most bugs rise from the bottom to the surface in their next step of progression toward adulthood. A few insects, such as damsel flies which swim, and most stoneflies which crawl, migrate to shore or objects that protrude through the surface film to escape the water and leave their shuck to become adults have no actual emerger stage. Once at the surface, insects that emerge though the film may become stuck as cripples (sometimes called “stuck in the shuck”) and may be very important due to their vulnerability. This is not technically a stage of the life cycle, but it is a behavior stage that feeding fish may key on making it important for fly tiers/fishers to be aware of. Very similar to the cripple emerger is a cripple dun. This could be a bug that drowns while trying to achieve the adult, or dun stage, or it could be a dun that is tipped over by the wind and gets it’s wing’s stuck in the surface film. Finally we come to the dun stage, probably the most recognizable stage. The duns are the classic dry fly. Unfortunately for those of us who love to fish them, they are sometimes not available very long before flying away for the final stage of their life, the egg laying stage. Egg layers may skitter along the surface or simply light and deposit eggs as they drift. Others may actually dive through the surface film, swim to the bottom and lay eggs there before swimming back to the surface. Finally, it’s all over and all that is left is the dead/dying stage. These may be classic flat wing adults we know as spinners or dead adults that have sunk or dyed crumpled on the surface.

All said with no Latin, but how do we use the information. Here is a typical set of flies selected for each stage of a life cycle. The patterns and colors are chosen with PMDs in mind, but comparable sets of flies can be put together for any specific insect. Nymphs or larva are typically found near the bottom. Weighted nymph patterns are effective for this stage and may include bead heads such as the ARF Tung-Syn PT or older patterns such as the Pheasant Tail with either a bead head or a weighted underbody. For the emerger stage I lean toward soft hackle unweighted (or lightly weighted) versions of these same patterns. I also have great success with flies designed specifically to be soft hackles such as the PMD Soft Hackle. I divide cripples into two categories. The first category would be flies that run into problems before fully reaching the surface. My favorite example is The Quigley Cripple followed by a soft hackle fished in or just below the film. For insects that have made their way through the surface film but are stuck at this final critical stage I prefer flies like Klinkhammers, Quigley Hackle Stackers and the Sparkle Dun. Adults may be imitated by many well know patterns. One of my favorites is a Comparadun, but many flies such as the Adams or a Quill Body Dun are effective. I don’t tie a specific egg laying pattern, trusting instead the same soft hackles I use for emergers or a winged wet fly. Finally there are spinners or drowned adults. Soft hackle patterns again produce well fished either just below or in the surface film. Other patterns like the simple Antron Wing Spinner produce well, but may be hard to see. A favorite pattern of mine that is easier to see is the U-Can-C It Spinner.

Making use of this non-technical knowledge and relatively casual observation you may find you are quickly able to predict activity of insects throughout their life cycle. This will allow you to fish various stages of bug life that are not visible to the “hatch watchers.” This common sense approach will allow you to experience the life of a bug in a day. 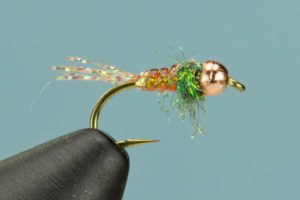 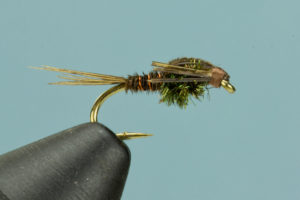 Hackle:  White or cream hen hackle with brown edging (I color the edge of a white or cream feather with a rusty brown marker) 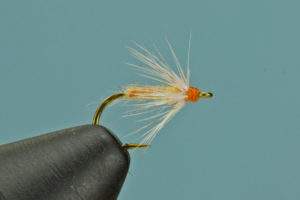 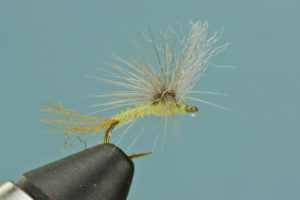 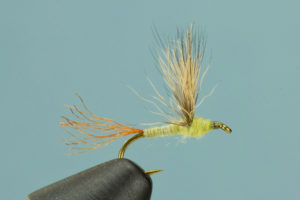 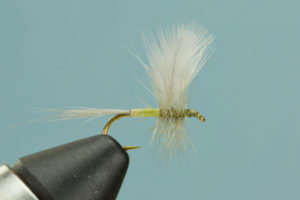 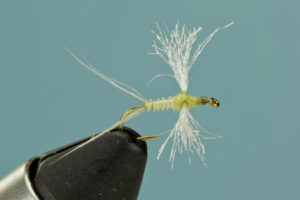 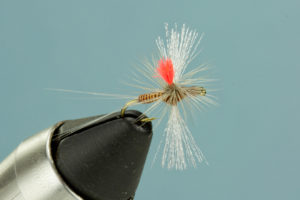