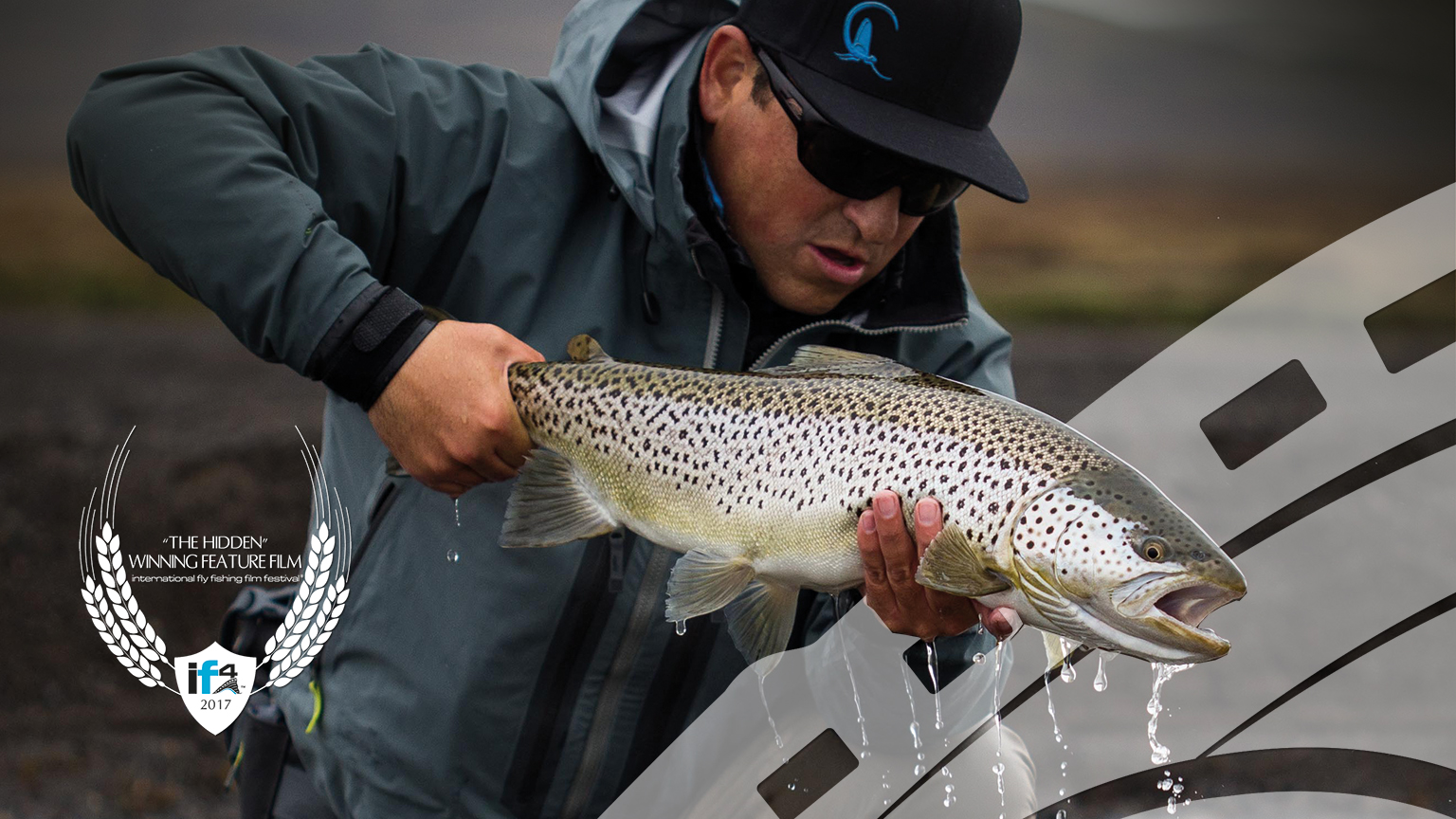 Fly Fusion caught up with Cortney Boice, Spencer Higa, Derek Olthuis, and Phil Tuttle of In-Tents Media to discuss the award-winning fly-fishing films, growing iconic beards, and catching prehistoric browns. Check out the interview by clicking on the image.

Fly Fusion: Cortney, how does one grow such an amazing beard? It has graced the cover of magazines, gone viral on social, posters – the list is too long. Give us a quick run-down on tips for beard procurement, maintenance and stylization.

Cortney Boice: Growing a beard is easy. For most people, all you need to do is simply not shave for a while and it just happens.  Growing a perfect, unkempt, wild beard is different.  I start my mornings off stroking every fiber a minimum of 100 times with a brush made from the tail feathers of a prehistoric pterodactyl. Then I bathe it in the oils excreted from a unicorn’s flank, but only while they are pouncing over rainbows. During the day, I try not to touch it so the hairs stay intact.  In the evening, the routine is the same but just in reverse. It is crucial during the process not to move very much or make loud noises… Nah, I just don’t shave… that is the secret:)

FF: How did the four of you meet? Are you life-long friends or did you meet on a river somewhere?

CB: Ironically, I met Derek at the first IF4 showing here in Utah.  Spencer and Phil were introduced to me by Derek.  We all had a ton in common, so the chemistry worked out. I love those boys!

FF: What drew you to making films?

CB: About 20 years ago I taught myself how to take photos. The past six or seven years I have been taking photos for Blue Halo out of necessity and out of the love for photography.  There was a natural draw that led me to video. I fought it for a while, then decided to make the jump. I still love to take photos, but creating sound, moving pictures and feelings that are more difficult to recreate with photography drive me to keep filming. I wish I had an extra 24 hours a day to create something amazing out of all the video footage I have stored. One day I guess.

FF: Spencer, congratulations to you and your crew on winning the best overall film with The Hidden for the 2017 cycle of the International Fly Fishing Film Festival.

Spencer Higa: We were so happy when we got the news that The Hidden won best overall film. It was a culmination of everyone’s hard work that made this film so special. It’s kind of scary filming/fishing in a location you’ve never been or have little knowledge about. We relied heavily on our guides Kristjan and Gunnar of Fish Partner to put us in best position to catch fish. Some parts of the film came together but there was a stretch of the trip where it was difficult catching fish. We had one day in particular that made our trip. We all caught monster browns and it really helped showcase what Iceland is all about. Those fish show up in the last scene of the film. Such a fun trip.

FF: The photo! You and that large Icelandic Brown Trout were synonymous with IF4 this past year. Any stories of people recognizing you from the photo?

SH: Well, I have to thank Olthuis for taking that great photo. We all caught several nice fish on that particular day so I guess I got lucky that they chose that photo. I was actually working, not knowing Fly Fusion had released that photo as the poster for IF4. I started getting text messages and instant messages from friends all over the place congratulating me on being on the cover of IF4. I even had some friends (Cortney Boice) who gave me a hard time wanting me to sign the poster. No, I didn’t sign it. Sorry Cortney.

FF: What occupies your time when you aren’t shooting films or fly-fishing?

SH: When I’m not filming or fly fishing, I occupy my time as owner/ VP of marketing for Tacky Fly Fishing. I’m truly blessed to be working in the best industry with some of the best guys around. The company is growing every year, so it has definitely cut into my fishing time. Being in Utah, I also love heading to the mountains in the winter with my snowboard.

FF: Phil, you are the master film editor of the group, responsible for taking raw footage and turning it into what the IF4 audience sees for the very first time at the premiere in Denver every year. Walk us through your approach to creating that final edit and provide some insight into what influences your creativity?

Phil Tuttle: It’s always stressful for me while trying make the edit come together.  It probably doesn’t help that most of my editing takes place in the middle of the night. For me it’s important for the final edit to be cohesive and entertaining throughout the entire film. The foundation is set with the music, which I believe is the most important component to any edit. Without the right music that portrays the right emotion, I could never make the edits work. I often have the music selected a year ahead of the next scheduled project so that I can begin to visualize the edit prior to even shooting it.

FF: I’ve seen your newest film Seriously North and it’s really impressive. In the film, you mention finding a human skull during the shoot. This is briefly covered in the film. Tell us a little more about that particular experience.

PT: That was one of the craziest experiences of my entire life. I was walking along the shore and I jumped from one boulder to another.  I looked down between the boulders and I saw a rock that had a hole in it.  I simply thought, that’s a weird looking rock.  It wasn’t until I started pulling the half buried “rock” out of the moss and mud that I realized that it was a skull.  I had a moment of absolute panic and my body shuttered from my toes to the top of my head!  It was humbling to know that it was “somebody” as opposed to something.  I instantly felt a deeper respect for the Arctic, the native people, and the difficult lifestyle of those who inhabited that seemingly inhospitable landscape.

FF:  You recently changed your media company name from Western Waters Media to In-Tents Media. What prompted the name change?

PT: We have been wanting to re-brand for years now actually.  We love adventure… maybe sometimes to our detriment.  Many of the destinations we fish are not only intense, but we most often are camping in tents.  It just made sense to rename our media group to something a little more fitting to the overall personality and style of the group.

FF: Derek, it seems like you guys operate with the “If we could go anywhere in the world, where would we go” mindset when planning out your films.

Derek Olthius: We ask ourselves that question a lot while we are deciding where we should film. For us if we can find a location and target species that we are really passionate about it really drives us to dig in and get to work. Those dream locations for us usually mean remote and wild, and being able to film in places like that makes the whole process so much more rewarding.

FF: How does The Hidden  compare to other film projects you’ve worked on?

DO: The Hidden was unique for us. We had never worked with a guide service before, but the guys at Fish Partner really made the whole thing so easy. Another unique aspect of The Hidden was traveling around Iceland and filming in such varied landscapes. Typically, we choose a single destination and explore that region, but in Iceland we fished a lot of different lakes and rivers throughout the country.

FF: What’s your motivation for working on these film projects?

DO: There are a lot of motivators for us to work on these projects. First and foremost, we are passionate about fly fishing and have a huge desire to fish places that are once in a lifetime locations for us. We prefer places that are off the grid and hard to get to. Filming during trips like these help us look back and appreciate how incredible it was to be there. Secondly, we want to capture moments and stories from the trip and share them with other anglers. Our hope is to inspire people to get out there and explore new water. It doesn’t have to be the trip of a lifetime or some huge destination trip, but if we can share our stories and act as a diving board for other people to work from, it’s a big win for us as a team.

FF: There is a rumor going around that you may be joining Fly Fusion Magazine as Travel Field Editor.  What kind of fly-fishing goodness can the magazine’s audience expect from your new column?

DO: Strangely, I have heard that rumor and couldn’t be more excited to join the Fly Fusion team. Readers can look forward to coming along on some of my adventures and sharing in moments that shaped the trip. The column will be photo rich and portray victories and failures. My goal is to relate the overall experience of the trip, including travel and cultural aspects or specific events that took place while on location. It’s my desire to continue along the same lines as our films and use the column to motivate anglers to find their own special places and experience moments that fuel their passion for fly fishing.