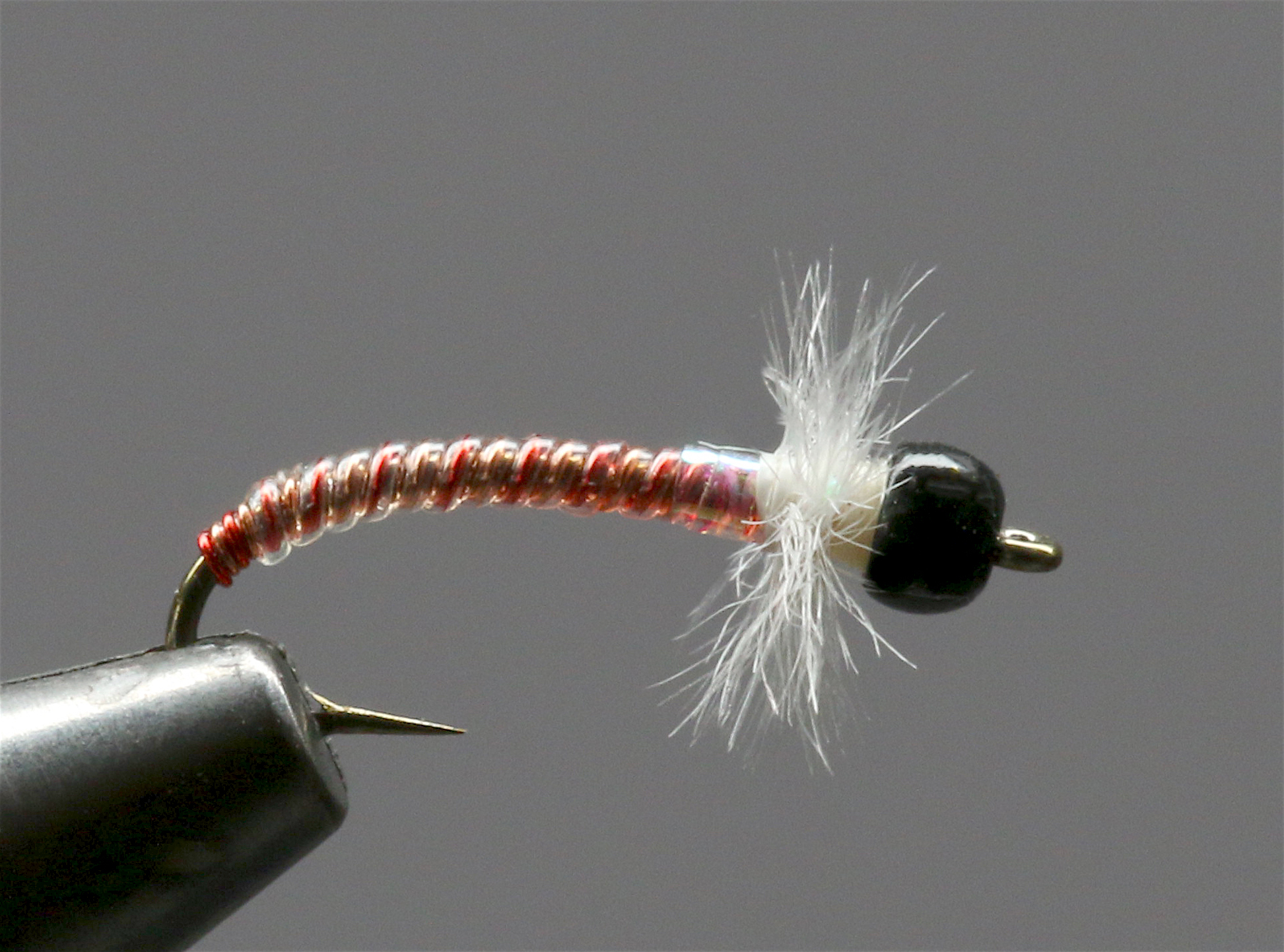 The Titan is the giant of the Tube Midge family, meant to represent Chironomids, one of the most important food supplies in any stillwater. The Titan is larger – ranging from #12 to #16, and has two pieces of small coloured wire inserted into clear Micro Tubing and three wraps of two coloured wires at the bend of the hook to secure. This allows it to look like a slim body inside a clear case. Unlike other chironomid imitations the white in this tie is not a bead, but white ostrich wrapped three times around the thorax and secured by white 8/0 Uni-Thread. A single wrap of tinsel behind adds a hint of flash. The ostrich moves like the gills on a natural and attracts cruising giants to the fly.

Chironomids in still water are on the move. When I set up a rig I always keep that in mind. One of my favourite ways to maximize movement in a fly is by using a non-slip mono loop knot. This allows the fly to move naturally and encourages the fish to react and strike. In addition to movement I believe in removing anything unnatural from my rig to prevent making the fish wary. This is why the tungsten bead works well – it’s a lot of weight in a small package.

If I’m using a single fly set-up I typically use a 9 foot, 3X fluorocarbon leader connected to the fly with a non-slip loop knot. This is a favourite when using a slow finger-over-finger retrieve. But I often use two- or three-fly rigs. In shallow water I typically use two flies to prevent snags and have a better chance of landing trout that go into the weeds. In deep water I prefer to cover more water depths with three flies to find out where the trout are feeding. When building a two-fly rig, I attach a two-to-three foot piece of 3X or 4X fluorocarbon tippet using a triple surgeons knot, leaving six-to-eight inch tag ends. When the knot is complete I cut off one of the tags and connect the fly to the other tag with a non-slip loop knot. The second fly is then attached to the long end using the same knot. With a three-fly rig I repeat the same process with a second piece of 3X or 4X fluorocarbon and connect the second fly to the short tag end off the surgeons knot, then attach the third fly to the final long tag end. The advantage to the flies on short tag end with an anchor fly below is maximum movement whether the rig is hanging still, bouncing in chop, or being retrieved with strips or twitches. The final ingredient is a large, medium, or small, clear or white Thingamabobber indicator to suspend the flies. If I am casting longer distances I use an orange Thingamabobber to improve visibility.