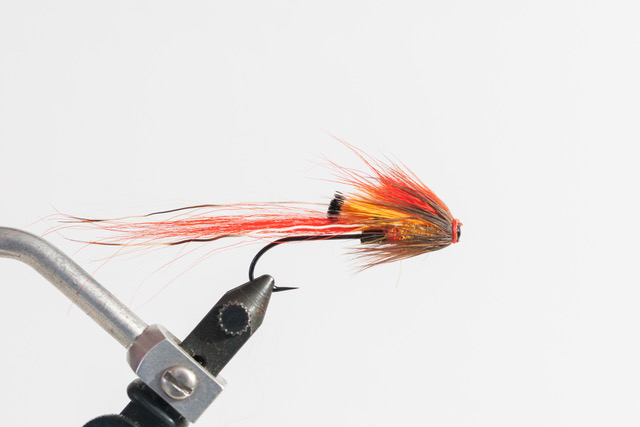 When it comes to fly tying, I’m pretty lazy, and get bored quickly. A good tying session might yield three or four flies; rarely do I tie a half-dozen at one sitting. So my version of the Micro GP is an exercise in economy: What’s the minimum in materials and steps to get the job done but still produce the most effective fly?

I tie this on a ¼-inch to ½-inch tube cut from lengths of 1/8-inch outside diameter air brake line. When fishing, I insert a Daiichi 2451 #6 or #8 hook into the back of the tube. Using the air brake line eliminates the need for a hook holder on the tube, so that saves a step. Tubes also allow me to use one fly with multiple hooks—if a hook gets dull or damaged, I just replace it. So ½ dozen Micro GPs can easily get me through a week of fishing. I’ve also eliminated the ribbing by using sparkle dubbing. The fly is small, so it only needs one tying station for the wing. The Krystal Flash is optional. I like it because it seems to work really well if used in moderation, but I’ve also had success without it, so eliminating it would save another few steps. The two-tone wing is something I’ve kept from the original RaginG Prawn, but you could get away with just using one colour – again, saving a step.

Eyes: Golden pheasant tippet. Rather than cut a notch out of a section of tippet, I snip a few of the black-tipped fibers and tie them in on each side. For the Micro GP this material would be optional.

Hackle: A sparse turn or two of pheasant or brown saddle at the head.