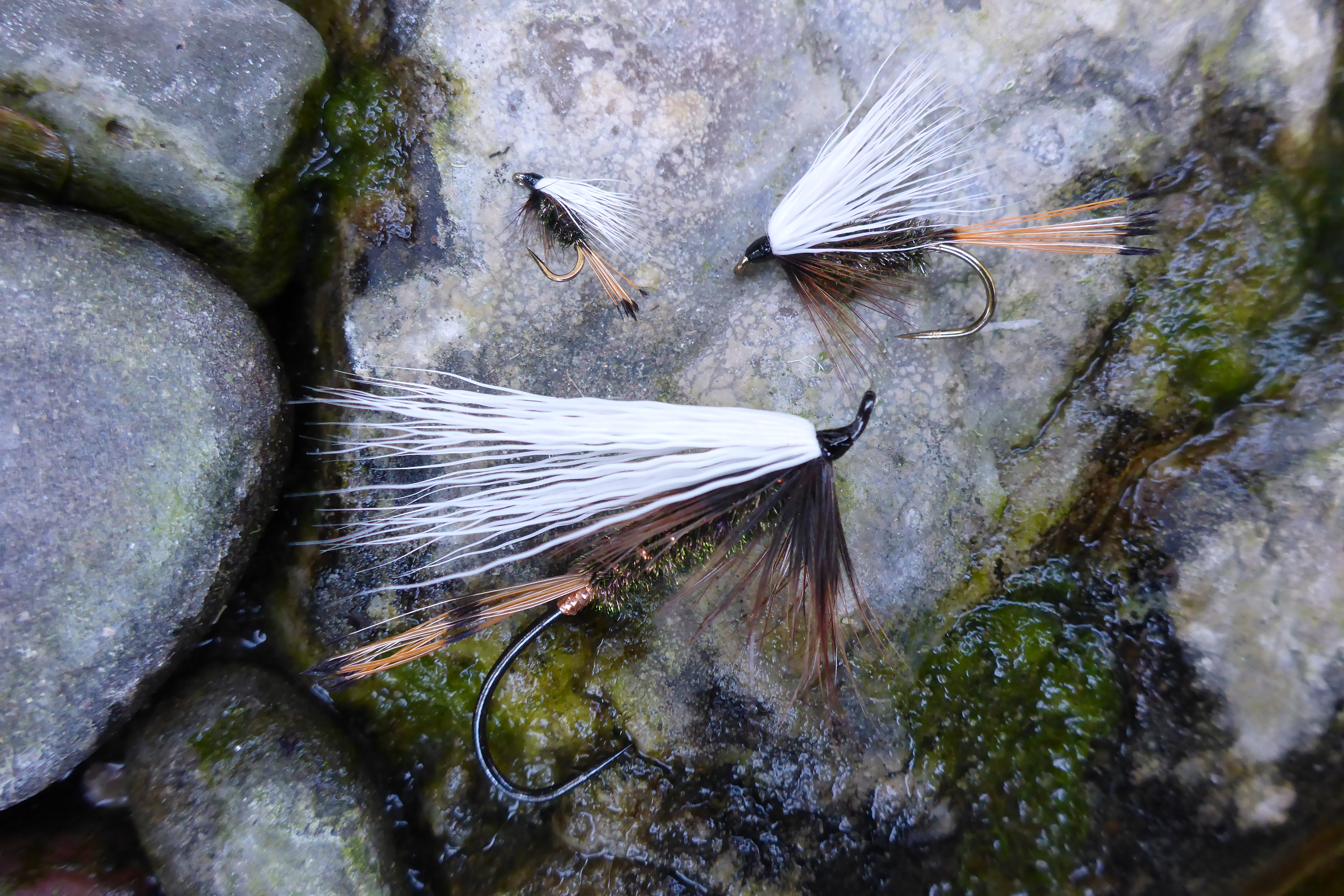 The story of Wayne “Buz” Buszek and his Western Coachman begins in the 1930s. Buz began fly fishing the local streams of California’s Sierra Nevada Mountains as a young boy. His abilities as a fly tier and fly fisher developed quickly, thanks to guidance from the local “old timers.” He excelled, developing into an exacting and innovative fly tier, a skilled fly fisher, and a “mountain goat of a hiker.”

Living in Visalia, California, his early career was with the U.S. Postal Service, but soon that changed. Local fly fishers frequented his back porch to discuss fishing and purchase hisflies. In the 1940s he continued to visit the Sierra Nevada Mountains, generally travelling alone since few could keep up with him, fishing for his dinner and sharing it with fellow hikers he met. Careful notes were taken regarding people he met, places he fished, fish he caught, and effective patterns, which he later transferred, sometimes strikingly,to white ink on black paper. His handwriting was as precise as the flies he tied.

Central California is farm country that supports a huge dairy industry. Through friends with access to a dairy he was able to acquire calf tails from aborted calves. This hair was perfect for several flies that Buz designed and fished, including a series of patterns he referred to collectively as the Floatin’Fool, a style of dry fly that uses the hair tips for the tail with the trimmed ends tied upright for a parachute wing post. Different body materials and hackle were used to create different patterns.

The Western Coachman developed from Buz’s interest in the then popular Royal Coachman. Initially from that came a fly he is generally credited with, the Old Grey Mare. It was similar to a wet Royal Coachman, but instead of the fragile duck secondary wing feather, Buz’s now-favoured white calf tail was used for the wing. The pattern had a green chenille butt and a red floss body. It was a durable pattern for the fast flowing rivers of King’s Canyon and Sequoia National Parks.

Buz continued to experiment with variations of the Royal Coachman, eventually using white calf tail tied back over the body, but keeping the golden pheasant tippet and peacock herl of the standard Coachman and Lead Wing Coachman wet flies. That was an early form of his Western Coachman. Finally he replaced the calf tail with white flank hair from a whitetail deer, a material discovered on a trip to Montana. Perhaps not as durable as calf tail, it was more buoyant and easier to see.

Jack Dennis in The Western Trout Fly Tying Manual describes the Western Coachman as being tied with a white calf-tail wing. As the story goes, Jack’s version is based on a fly given to his father in the 1940s. Though seldom tied today, another variation places the wing behind a stiff hackle –  Buz called it his dry version. The use of more or less deer hair dictates whether the fly is fished dry or wet. The addition of paste floatant to the wing further assistsflotation.

Startingabout 1942, the Western Coachman quickly became popular with Buz’s back-porch clients. Buz soon left his postal job and opened a full-time fly and fly-tying store, Buz’s Fly and Tackle Shop, or as most knew it, simply “Buz’s.” In his first catalog he wrote that the Western Coachman was his number one producer and his favourite fly. In short order it was known across the country for its effectiveness on rainbows, browns, brook trout, cutthroat, crappie, bluegill, bass, and even steelhead. For years, even after Buz’s untimely death in 1965, it accounted for 50% of the fly sales in the shop.

Though Buz developed many other patterns, including the Kings River Caddis, the Buszek Hopper, the Dun Caddis, Searcy’s Muddler, Lake Marabou, and is credited with changing the name of his friend Doug Prince’s Forked Tail Nymph to the Prince Nymph, he is most recognized for the Western Coachman, a fly as effective today as it was 76 years ago. 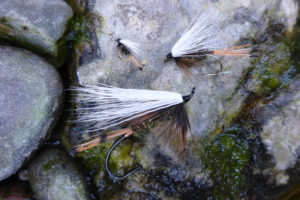 Wing: White hair from the flank of a whitetail deer

Step 1: Attach the thread at the end of the shank and wind smooth, adjacent wraps, stopping about 2 ½ eye widths behind the eye. 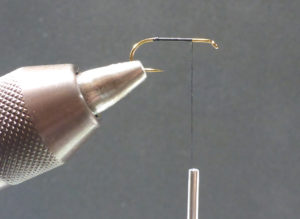 Step 2: Measure golden pheasant tippets to the length of the hook shank, trim to length, and tie in at the tail position. 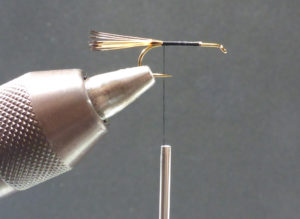 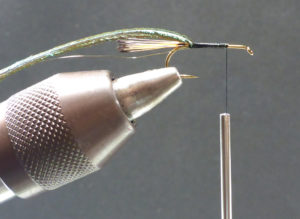 Step 4: Wind the peacock herl forward, and then counter-wind the wire through the herl, tying off both with three wraps of thread. 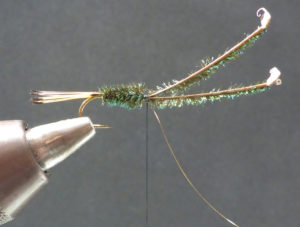 Step 5: Fold the hackle, trim out the tip and tie down with three wraps of thread. 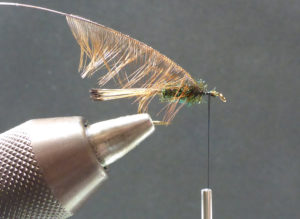 Step 6: Wind the hackle forward and tie off with three wraps of thread. (Note: Too many thread wraps can create an uneven surface that can complicate wing mounting.) 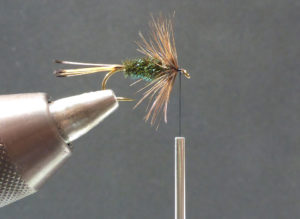 Step 7: Stack the deer hair and measure so that the tips extend to half the length of the tail. Trim the butts as shown and wind the thread around the clump with two winds before pulling up, not down (to keep the wing from twisting around the hook). 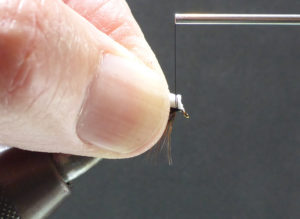 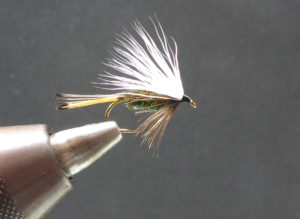 Article and images by Wayne Luallen. As published in the Summer 2018 issue of Fly Fusion.

Thanks to Dr. Eugene Mathias, now deceased, good friend to Buz and Wayne, for much of the information in this article.