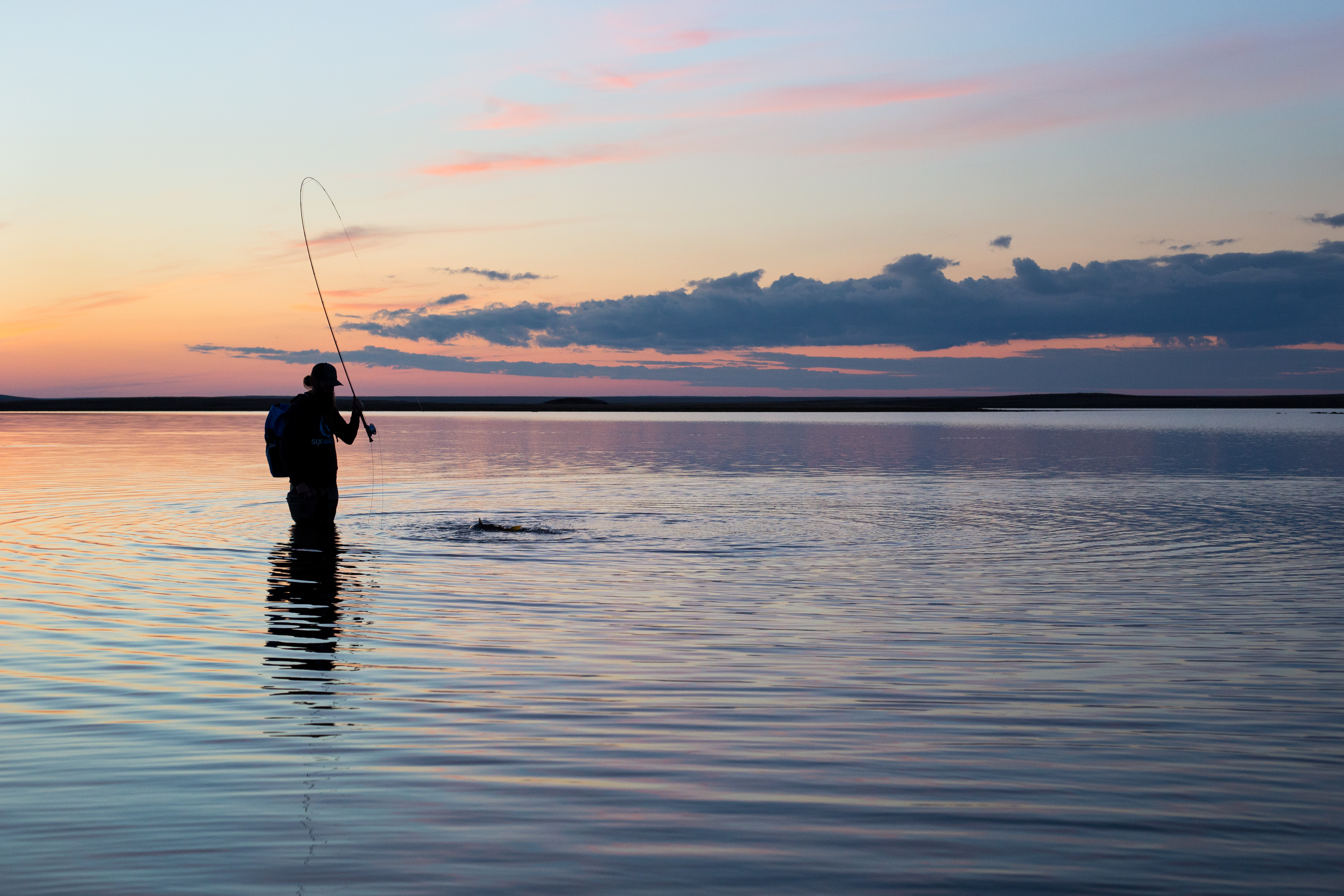 Derek Bird: What does your dream trip look like?

Gary Borger: Well, I’ve had quite a number of dream trips in my lifetime. Probably the biggest dream trip that I had early on was going to New Zealand in 1982. I had always read about New Zealand and of course was very interested in going there to see the water clarity and to see if what everybody wrote was really true. In most regards I think it was true. Although I think sometimes people get the idea that there are more trout in New Zealand than there actually are. It’s true that the trout are all big. But a river can hold a thousand one-pound trout or one one-thousand-pound trout or some combination thereof. So, there’s only so much biomass available and most of the fish are larger. I think my average fish is 24 ½-inches overall.

Another one was my first trip to Alaska to fish for silvers and rainbow trout. It was everything that I’d ever read about Alaska and heard about Alaska. I’ve been there a number of times since and it’s always met my expectations.

DB: You’re one of the most influential fly-fishing writers of our time. Is there one writing project that stands out to you more than another?

GB: Well, I think two. The first one was the first book I did, which was Nymphing in 1979. Then I did the Nymphing video in 1982. Those two – the book and the video – completely changed the way people thought about nymph fishing and all kinds of things have progressed out of that. So, that’s one of my babies that I really like.

The other one is a book I did called Presentation, which has been called by a lot people the Bible of fly fishing. It was widely accepted and even now if you try to buy a used one it can be $500 or more. I wish I’d held fifty of them to sell at this time. I published it in 1995 and by about 2000 I was out of all the copies. I didn’t republish a new one because so many things were happening in technology and line, reel and rod development that I thought I’d wait a little while until that sort of stabilized. Back in 1995 there was level line, a weight-forward and a double-taper. Now there’s all kinds of stuff out there. You talk to RIO and they have a hundred and twenty different kinds of lines. So, I want to wait until some of that sort of settles down before we bring out a second edition.

DB: Who influenced you as a fly angler, and are there people that you looked up to?

GB: Certainly. I started fly fishing in 1955 when I was eleven years old. I was already fishing and catching lots of trout on worms and spinners. But I kept reading my father’s outdoor magazines like Outdoor Life and Field and Stream. He liked to hunt so he’d read all these magazine on hunting. Well, of course, I liked to fish and so I’d read all the fishing stuff.

In those days it was Joe Brooks and Ted Trueblood and A.J. McClane, and then of course the young Ernie Schwiebert. What they wrote about fly fishing and the way they wrote about it just seemed like something I really needed to do. So I asked for a fly-tying kit for my eleventh Christmas and started fly fishing the following spring and I’ve been doing it ever since.

DB: Did you have a chance to fish with any of these guys?

GB: I never met Joe Brooks. I knew Ernie Schwiebert. I didn’t get to fish with Ted Truelood or Al McClane. So, I didn’t get to actually fish with any of them although I did know a lot of them eventually. But I always idolized the way they wrote about fishing, and the romance of it, which I don’t think ever goes away. I think there’s always some romance built into it even though you may approach it from a more scientific or clinical kind of approach.

DB: Do you have any upcoming projects that you’d like to talk about?

GB: I’m continuing to work on this twenty-book series that I’ve called Fly Fishing, The Series. I’ve put it on hold for just a little bit because we moved from Wisconsin to Washington State and we’re moving into a house that we’re trying to remodel. Although one of the books is done and another one’s maybe two-thirds done. So, as soon as I can I’ll get that taken care of. I came out with a new DVD on casting a couple of years ago that has been extremely well-received. That one I call The Perfect Cast – One. I’m going to do two more and probably shoot those this summer. Those are the big projects I’m working on at the moment. Of course, the Presentation book is sitting there waiting to be redone.

DB: Is there one thing in your career to that stands out a kind of an apex or a pinnacle, or is that still around the corner?

GB: I’m still climbing the hill. I haven’t gotten to the pinnacle yet. There’s a couple of things we’ve done that were not necessarily major in the fly-fishing industry but were family things that were sort of interesting. One was that I was Midwest Director of the Fenwick fly-fishing schools when they offered schools. I was invited to do fly-fishing schools for Fenwick down in New Mexico at the Vermejo Park Ranch. It was a six hundred thousand acre ranch up in the northeast corner of New Mexico that had 27 different lakes and several streams. We did fly-fishing schools there every summer. That place was unique because it was such a large piece of property and the only people who were there were guests that came for the schools or that were at the ranch. So, we had lots of really great summers there.

Jason [my son] sort of grew up on the ranch. He started fly fishing there when he was five and through his whole career fly fished there until he was out of college. In fact, when they wanted to interview him for the movie A River Runs Through It, we were in New Mexico doing a fly-fishing school. We left the day after the schools were finished and drove twelve hundred and fifty miles to Livingston Montana so he could be interviewed the next day. I’m surprised he was awake enough to be interviewed.

DB:  Were you involved with the making of the movie as well?

GB: I got a call in March of the summer that they were going to begin shooting. They said, “We’d like you to come and participate and help us out.” I said, “Well I can’t do that. I’ve got fly-fishing schools already booked and I just can’t do it. Maybe you ought to talk to my son, Jason. He’d be willing. He just graduated from college with a degree in film and TV production.” So, we put his resume in the mail on Wednesday and on Friday they called us from Los Angeles and said they wanted to interview Jason.

So, Jason went and interviewed and was accepted. Then he became the double for both Brad Pitt and Craig Sheffer. He did all the casting for those guys, and he did some of the casting for the other people in the movie too.

I went to talk to the director of the second unit. The second unit is comprised of the people that take care of dogs, cars and trees – stuff that doesn’t involve an actor. So, one job was to shoot underwater pictures of the fish, and fishing scenes that didn’t directly involve the actors. The photographers had never done any underwater photography, so I talked to them about the lenses to use and some of the tricks that we used when we were filming. They gave me a credit for “technical advice” and I was there for a couple days. I was happy to do it and yeah, it was cool.

DB: How has fly fishing changed since you started?

GB: I think the greatest change of course has been the technology. We’ve vastly improved fly lines, we’ve vastly improved fly rods and we’ve vastly improved reels. There’s also a tendency in some of the younger fishers to be more focused just on catching fish and not be so concerned with identifying insects or knowing more about the ecology that’s going on. When I go to clubs and speak, the older people seem to be focused on it. The younger people seem to be more focused on the adventure of it, which is fine. I certainly love it as much as I do anything else. But I think there’s a necessity to maybe understand the ecosystem a little bit more and that some of them are missing out. They could have a greater enjoyment of their fishing if they knew a little bit more about that stuff.

DB: Where do you see the sport of fly fishing going in the next ten to twenty years?

GB: I know where I’d like to see it going. When you watch television and see that the government has to advertise to get children to go outside to play you begin to wonder what’s happening in society. When I grew up what mothers always said was “get outside and play.” They didn’t want us in the house. There’s a difference in the way that children are being raised. I would like to see clubs more involved in not just teaching people how to tie flies and go catch a fish but talking about the holistic approach to the sport – all the ecology that goes on and all the interesting things that are happening in the world around you while you’re fishing, and all the other things that are involved in the fishing process. I understand that tying your own flies and catching a fish on the fly you tied is one of the ultimate joys of life. But it’s also about being able to appreciate the whole concept of nature and the way ecosystems work. Why does this river flow like this and what can we do to protect this river and what does it mean to protect a river? Our societies are increasing in numbers all around the world and there’s more and more pressure on our resources. So, how do we manage the resources in a way that the resource isn’t destroyed and there’s still enough left over for the people who really need it? Those kind of things need to be brought into our society more than they are and I think fly fishing would be a good way to do that. But I haven’t seen that yet. I’m just hoping it does happen. So, there may be a change in the way clubs are going to have to participate, especially in trying to draw younger people into it.

DB: What’s next? Do you see yourself retiring at any point or do you just keep going?

Gary: Well, I’d like to win the lottery so I can just go fishing all the time but that’s not going to happen. But, no, I don’t see any reason to give up the whole concept of fishing and helping other people understand it. My primary goal in life is as an educator. That’s what I’ve always been and that’s what I will continue to be. So the writing and the DVDs and other kinds of things are done to help people better understand our sport. I don’t ever see that going away.