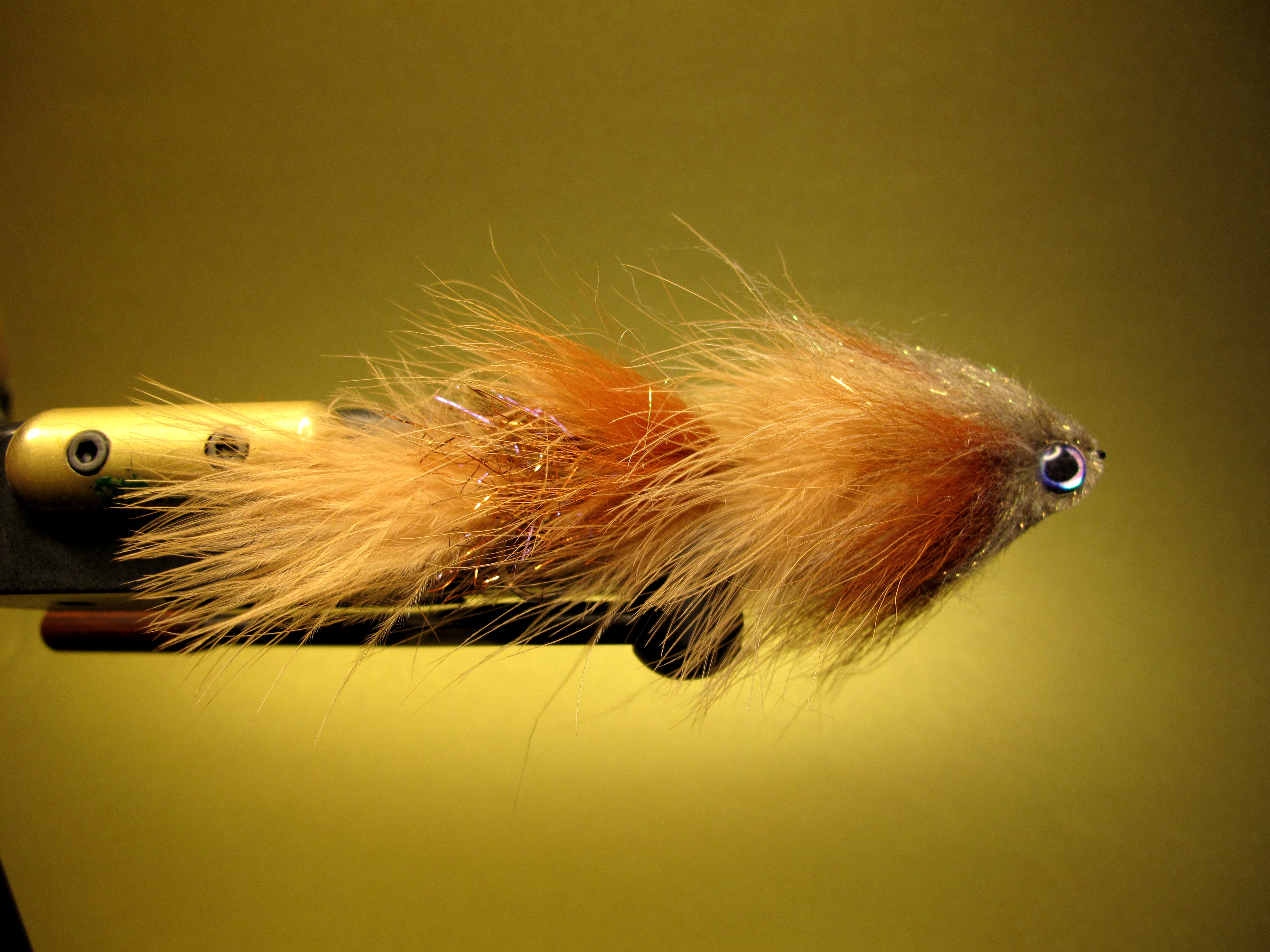 The great thing about big streamers is that, because of their bulk, it doesn’t take too long to fill up an average sized fly box. The tough thing about streamers is that it’s easy to lose a bunch over the course of the day. Here’s the Junk Yard Dog to help deal with the loss.

STEP ONE:  With the back hook in the vise, start the thread and wrap it to about mid-shank. Secure a single marabou feather, leaving it hanging off the back of the hook approximately one shank-length.  Clip the excess about an eighth of an inch behind the eye and bind the feather to the top of the hook shank.  Finish with your thread at the rear of the shank. Then tie in the Polar Chenille opposite a spot between the hook point and the barb, and wrap your thread forward nearly to the eye.  Palmer the Polar Chenille forward, taking care not to bind any of the pieces to the shank.  Once behind the eye secure the material with a few tight wraps of thread, then clip the excess.

STEP TWO:  Make a marabou veil over the back hook.   Prepare the marabou feather by coming down from the tip and trimming  out the top by clipping the center stem at the point where the fibers are long enough to reach past the Polar Chenille once wrapped. To form the veil, hold the marabou on top of the hook shank and use the thread tension to spin the marabou, similar to the way you spin deer hair.  Once the marabou is all the way around the hook shank, carefully trim the butt pieces behind the eye and make a few wraps over them, advancing your thread to just behind the eye of the hook.

STEP THREE: Take a pinch of Arctic fox tail and tie it in with the tips hanging out over the eye of the back hook. Use your thumb to reverse the Arctic fox tail back over the rear hook and then bind it down on top of the shank with a half dozen wraps, creating a tidy bullet-shape.  Whip finish over those wraps and the back hook is complete.

STEP FOUR:  To connect the rear hook to the front hook, use a four-inch piece of 19-strand, .018″ Beadalon, with a few beads to close the gap.  Place the front hook in the vise and secure it with crossing wraps up and down the shank of the hook.  Make sure that the loop is vertical in the back once bound down so the rear hook will have unimpeded movement.

STEP FIVE:  Wrap the thread forward about one third of the hook shank and then add the marabou for the mid-body section.  Take two fluffy marabou feathers and hold them on top of the hook shank, then use the thread tension to help spin them to encircle the shank (similar to the way you formed the veil on the rear hook).  Once the marabou is spun around the shank make a few security wraps before trimming the excess, then wrap over the butt sections.  Figure-eight a set of dumbell eyes on the underside of the hook shank.  The front edge of the eyes should be just back of the eye of the hook.

STEP SIX:  To give the front hook bulk, hollow-tie a fox tail collar.  At about mid-shank take a clump of lighter coloured Arctic fox tail and spin it around the hook shank, with the tips out over the eyes.  Once spun in place work your thread through and make a few wraps at the base of the hair, then advance your thread about to the rear of the dumbbell eyes.  Just behind the eyes spin in a second, darker clump of Arctic fox tail, hollow-tied as you did with the first clump.