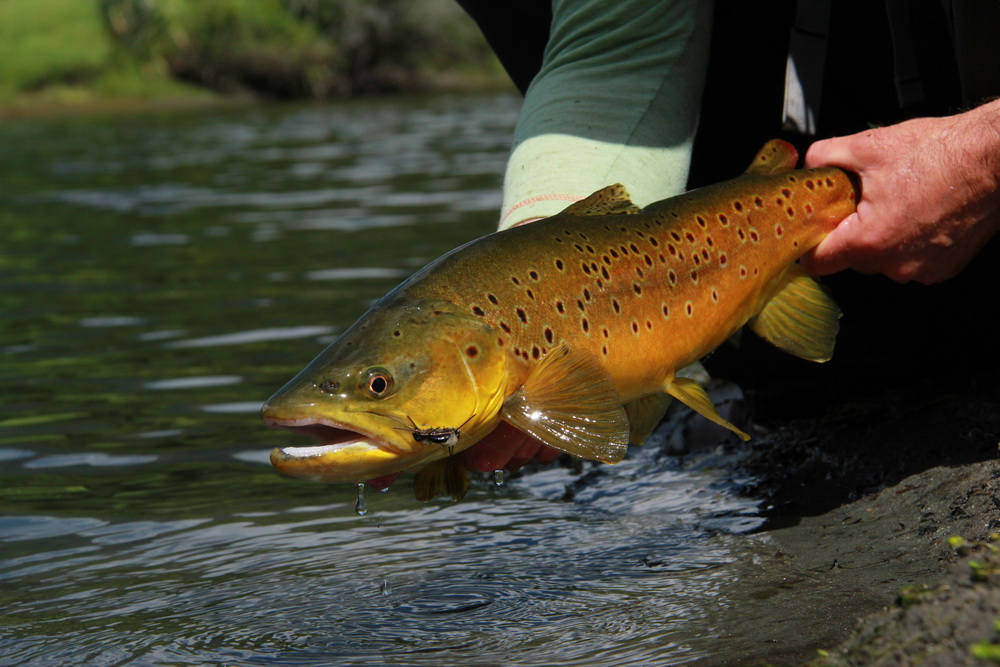 Beetles are recognized as terrestrial fare for trout, certainly, but we usually think of them as dry flies. Well, fly tiers are never satisfied with the status quo, regardless of the success of status-quo flies. Beetles wet are an excellent addition to any fly fisher’s tool box.

It started like so many other trips. First a weekend speaking engagement at the shop; then a few days of fishing in local rivers. But this trip had a different ending. The Cumberland River was up 17 feet, due to extended, heavy rains in the weeks before the engagement, and the planned trip to its rich waters was quite rightly cancelled. So, Don MacLean, shop owner and friend of some years, suggested we head into southeastern Kentucky and fish the smaller streams of the Daniel Boone National Forest. Sounded good to me.

The smaller streams were not in the unruly condition of the Cumberland, but they were still a bit high and slightly off colour. Still, it didn’t look impossible. It just seemed like we would fish the day and catch a few—more of an outing than a serious fishing trip. Still, I had spent much of my early life fishing streams of this size in the wooded hills of northwestern Pennsylvania, and there was a certain nostalgia in plying these waters that so reflected the days of my youth.

Don rigged up a Muddler Minnow, and I fussed around hitching up a couple of nymphs to be fished deep with indicator and shot. Set up complete, we headed out—Don downstream and me up. The first several pools offered nothing. Time to change flies. As I dug around in the box, a cluster of black foam beetles caught my eye. This was forestland, and beetles are always present in such areas during the fishing season. Removing the nymphs, I knotted a size 16 imitation to the tippet, about 10 inches from the shot. Adjusting the indicator just a bit so it was up the leader about 1 ½ times the depth of the water, I set off again.

Suddenly it changed from just an outing into a fishing day. Every pocket of any size gave up a trout or two—scrappy little brookies and nicer browns. And then, through the trees, I saw Don coming toward me. I stopped casting and waited for him to reach me.

His Muddler plopped in and swung across the tail of the pool. A brown flashed at it. He cast again. The fish flashed at the fly a second time. But several casts later, and the fish had not showed itself.

“They’ve been dong this all morning,” Don said in exasperation, attaching his fly to the hook keeper.

“Well they’re not taking the Muddler,” he said.

To the fish’s credit, it didn’t take the beetle on the first drift; it waited until the second drift. The nice brown darted away on the release, and on the very next cast, there was another. I glanced at Don, and the dark expression on his face told me I had worn out my welcome.

“I’ll skip a few pools and give you first shot at them,” I told him, and quickly headed upstream.

After lunch, I set Don up with the beetle rig, and we both had a fishy time.

I especially like the foam beetle when fishing deep, nymphing-style because it’s designed to float high and dry, so when held down by the shot, it dances and pulses against the tippet as the lead trips and bounces over the bottom structures.

The foam beetle is a good choice when fishing a two-nymph rig. When fishing tiny flies, I often trail a small midge larvae or pheasant tail off a size 14 or 16 foam beetle. A big foam beetle works well with larger nymphs. The antics of the foam fly keeps the trailing nymph dancing and jigging around.

Beetles are recognized as terrestrial fare for trout, certainly, but we usually think of them as dry flies. Perhaps this has resulted from fly fishing’s fascination with floating imitations, or from the popular writings of the notable Vince Marinaro. His work on the LeTort Spring Run near Carlisle, Pennsylvania, set the standard for terrestrial imitations. Beetle patterns, he discovered, had to be silhouette-prominent. That is, the best flies are opaque and prominently display the beetle shape. His Jungle Cock Beetle imitation was the first really successful design for these insects.

Well, fly tiers are never satisfied with the status quo, regardless of the success of status-quo flies. And soon others were generating beetle patterns to rival or outdo Marinaro. To me, the simplest of all, and the best, is the Foam Beetle, first popularized by Ken Thompson; just a body, hackle legs, and foam pulled over the top. It’s tough, floats endlessly, is super easy to tie, and catches fish like gangbusters. Everything I want in a fly. I simplify it by using coarse dubbing for the body and brushing it out to form the legs. Sometimes, I just tie it with the foam. Seems to work just fine.

But fishing it wet? Well, any terrestrial falling into a stream eventually gets swept under. Anglers have fished wet ants for many years. And grasshoppers are prized by the bait guys, fished with split shot right along the bottom. But beetles? Seems no one gives them much notice as wet flies. They are important, however, in most waters, especially in forested and meadow streams. Beetles are always poking around in the vegetation and falling onto the water.

Beetles, by the way, are the largest order of insects on earth, with between 350,000 and 400,000 species; which also makes them the largest order of all animals. And although they vary across the board in size and shape, there are only two basic designs that the fly fisher need worry about. The first is the classic “scarab” shape—more or less rounded like a Lady Bug (really a beetle) without a clear delineation of head, thorax and abdomen. This is the style that most fly fishers have in the box. Mostly I use sizes 14 and 16, but have sometimes found 18’s to be best. The other shape looks like a Click Beetle—elongate with a clear delineation of the three body regions. Both are useful. And larger sizes, especially in the elongate form, can be surprisingly effective. These elongate ones are best tied in size 8 to 12, 3XL with rubber legs.

Rene Harrop and I were invited to speak at a major sporting show in Tokyo, and afterwards to each spend a day shooting a TV program in the mountains to the far north. Rene was to fish dry flies, and I was to fish nymphs. As often happens in early spring, the weather turned nasty overnight, and we awoke to a cold, windy day that held little promise for the fly fisher. Rene left early with his crew to fish water further away. I headed out to a local stream, TV crew in tow. I was not optimistic.

The morning proved me right. Nothing.

After a lunch of rice balls and fish, we moved a bit further downstream. Immediately I noted a semi-waterfall. It was a place where the flow was pooled by several large boulders, wedged tightly against one another; the water poured over and around them into a deep plunge. If there were any trout in feeding mode, surely they would be in the depths of this pool.

I rooted about in the fly box, and my eye fell on a foam Japanese Beetle, size 16. The weather had been warm for a week or more before that cold, blustery day, so the beetles most certainly had been out and about, and there were plenty of trees along the river. I knotted it onto my nymphing leader, added a shot about 10 inches above the fly, and checked the indicator, moving it up about 6 feet from the fly.

Several casts into the probing, the indicator darted under, and I was fast to a 12-inch Iwana. The TV crew swung into action. Underwater cameras appeared as if by magic. Several cameramen on shore leapt into action. It was TV drama in the making. I thought nothing of it; after all, a 12-inch trout is really not all that special. Or so I assumed. It was a prize from that stream, as it turned out, because the waters were heavily fished for food, and the TV crew made the very best of it.

I was delighted for them, but even more so because of the irony of catching a trout in Japan on a Japanese Beetle, fished like a nymph.

Studies have shown that in meadow streams of the western U.S., terrestrials make up more than 50 percent of the trout’s diet. This includes ants, hoppers, inchworms, wasps, jassids, and of course, beetles. And fishing a small mountain, meadow stream with a dry, foam beetle is always great fun. But, probing the deep waters of a corner pool, a heavy run, or an undercut bank with a foam beetle, fished like a nymph, will often yield the biggest fish of the day.

The leader I use is my standard Uni-Body design: four feet of 0.020 inch Maxima Chameleon (MC), one foot of 0.013 inch MC, four feet of 2X tippet material of your choice, a tippet ring, and then 10 inches or so of 4X or 5X for the smaller beetles. For the big beetles, I use normally use 3X because the take can be quite strong. The shot goes right above the tippet ring, 10 inches from the fly. The indicator typically goes on the 0.013 MC, five feet or so above the fly.

In addition to the terrestrial forms of beetles, there are most definitely aquatic beetles. They breathe air, so must come to the surface from time to time, but their habitat is distinctly aquatic. Their larvae are aquatic, and are one of several insect orders that have what I call the “Woolly Worm Larvae.” They are elongate and have numerous, linear body appendages. I fish a Hair Leg Woolly Worm to suggest these insects. It has been effective from Alaska to New Zealand, from Patagonia to England.

I was fishing Hot Creek in California one June, and Bob Brooks, then manager of the property, told me that the trout in the final pool, just before the fence at the lower end of the property, were feeding on aquatic beetles at that time of year. It was the tip I needed.

I knotted on a size 18 black, foam beetle, added a small shot about a foot up the leader, and cast across, allowing the fly to gently swing just under the surface in the slower currents of the relatively shallow pool. I could see the trout turn from their lies and chase the beetle, often inhaling it, necessitating the clipping of the leader to release the fish. Good thing I had a dozen of the little flies nestled in the box.

Aquatic beetles are also denizens of lakes. They inhabit shallow weed beds so common to near-shore waters. I fish them with a floating line, adding a small shot to the leader so the fly gets pulled under but doesn’t sink too deep. Use the Strip/Tease retrieve: drop the rod tip nearly onto the water, and point it straight down the line. Strip slowly—about one foot in three seconds, and while stripping, shake the rod tip back and forth six inches or so. Then stop and rest the fly for about three seconds. The strip keeps the fly moving, the wiggling rod tip makes it pulse and jerk along.

Beetles wet are an excellent addition to any fly fisher’s tool box.