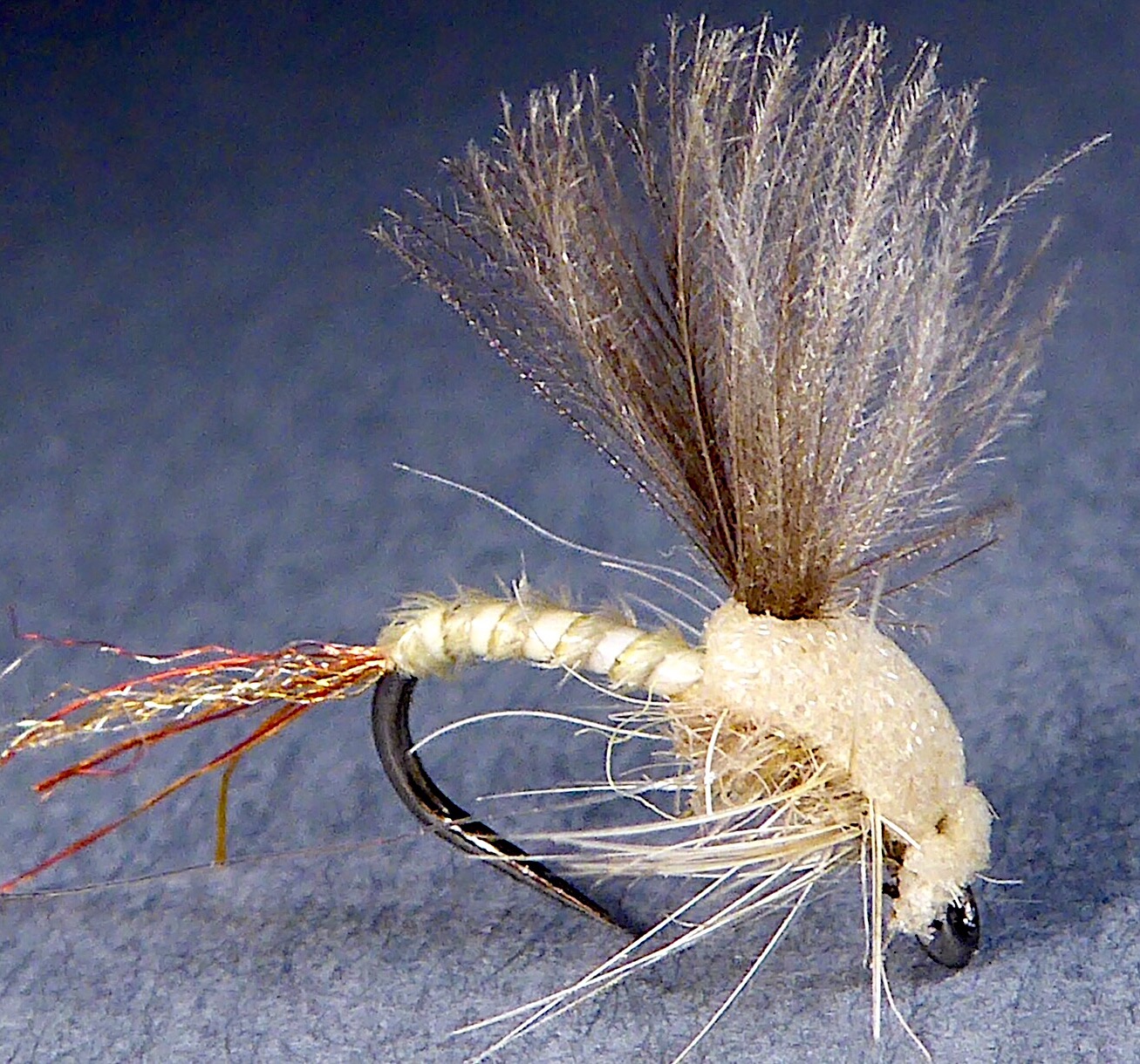 As one who has for years enjoyed fishing the tailwaters and spring creeks of the West, I have become enamoured with the trout’s propensity for keying in on emerging and crippled mayflies. When in this emergent stage, the mayfly is most vulnerable to predatory trout, and the fish soon figure that out.

With this in mind, I have designed most of my dry and emerger patterns from materials that move, are soft, and replicate the profile of a natural insect. Initially I used mostly natural materials such as furs and feathers, but with such a rich abundance of new fly tying materials on the market, some synthetic materials have found their way into my flies.

This pattern is a marriage of natural and synthetic materials to fit a very specific purpose, and it was several years in the making. I wanted to produce a fly that sat trapped in the surface film, but also retained excellent buoyancy, had a very lifelike appearance, and was easily visible. I’ve long been a huge fan of the beautiful spring-creek patterns designed by Idaho’s Rene Harrop. His flies epitomize realism and natural movement. Like Harrop, I have found CDC wings to provide these qualities. However, they always required a great deal of maintenance to keep them afloat. I incorporated a foam wing case to provide a platform for the CDC to sit on to retain better buoyancy. That platform also helps the wing stand upright for better visibility.

But I also wanted the wing case to look as if it were splitting to allow the wing to emerge. This was the most pressing problem in tying the fly. How do I get the wings through a hole in the foam? After a variety of disappointing attempts at both pushing and pulling the wings through the foam, I finally settled on using a small wire threader that’s designed to fit through the eye of the hook. The wire is thin enough to easily push through the hole in the foam without tearing it.

I also decided on a trailing shuck of antron dubbing with a bit of deconstructed Semperfli Glint Nymph for added sheen and softness, and for its realistic, translucent appearance when wet. By “deconstructed,” I mean a strand of Glint Nymph that I’ve scraped between my thumbnail and forefinger until the fibres separate. I then overlay it onto the Antron dubbing that has already been tied in. I’ve never been a huge fan of antron and Zelon shucks that are often preferred by tiers because of their stiffness. The dubbing is much more flexible.

The body material is a turkey biot which mimics the thin, segmented profile of the natural. The thorax is made of natural dubbing. Just enough hackle wraps are added to provide a good platform for the fly to land on, and to help keep it afloat.

I fish this fly like any emerger or cripple pattern. Usually it is cast to difficult, discerning fish on slow-moving water with multiple currents. My favourite approach is to target a specific fish and present a quartering downstream dead-drift with either an upstream or downstream mend, depending on the different currents. Occasionally, I move the fly ever so slightly if a trout is particularly selective, to give the impression of the mayfly escaping the nymphal case. When done properly, this has fooled some spectacular trout over the years.

While no fly pattern is perfect for every situation, this fly checks off all the boxes when fish are keying on emergers. The variety of materials with which it’s tied allows it to imitate the translucence, delicate profile, and movement of natural specimens while still providing buoyancy and visibility.

Check out Chris’ other patterns by clicking here and visiting him on Facebook.

(Editor’s Note: This article originally appeared in the spring 2018 issue of Fly Fusion Magazine under a different tier’s name. Chris Williams is the correct tier.)