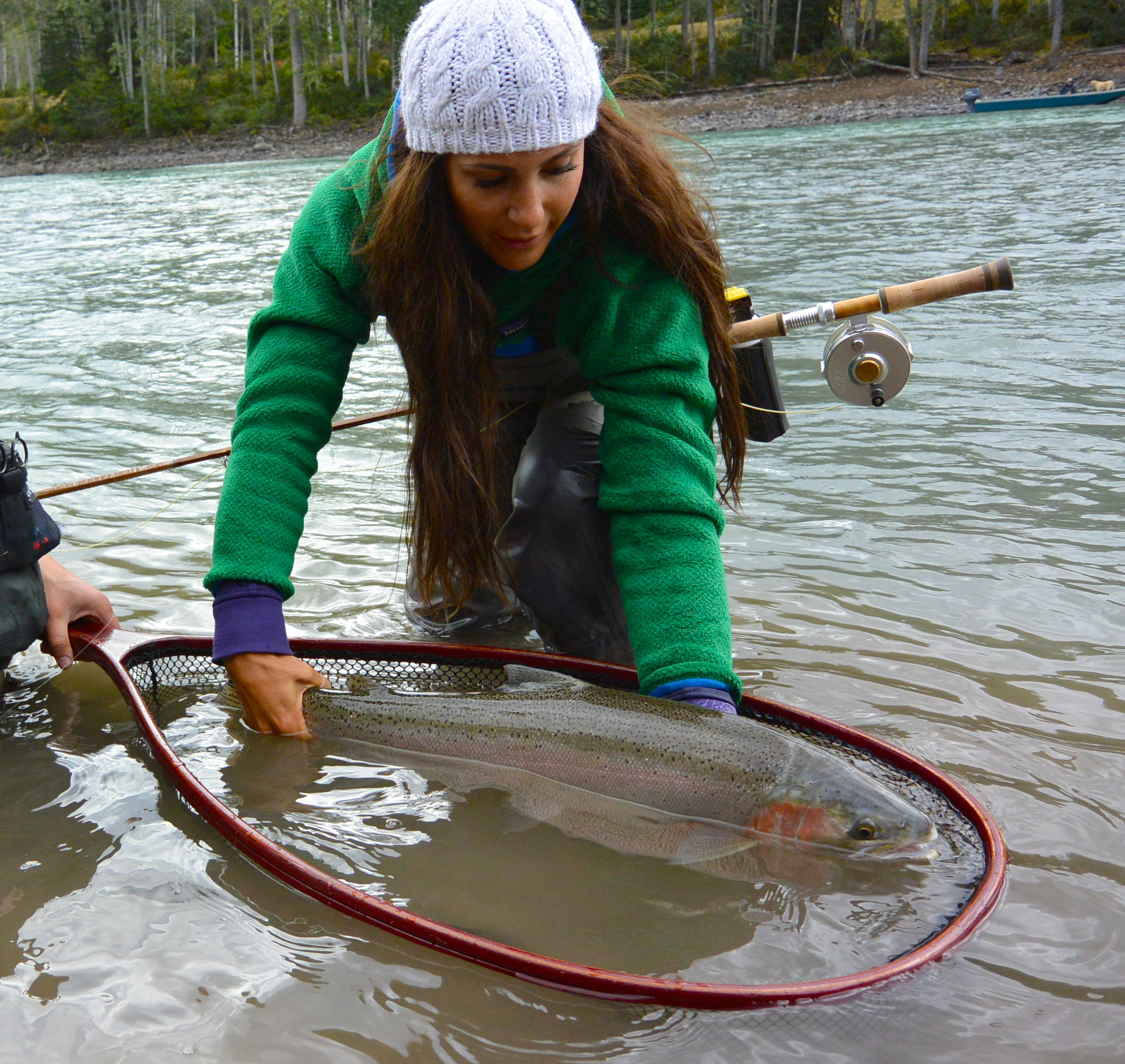 April Vokey: Where were you born and where do you  live now?

I was born in Toronto, and did my undergraduate and Masters at Trent University in Ontario, and my PhD at the University of Alberta in Edmonton. After getting a lot of work experience in Canada and abroad, I secured a faculty position in the Department of Environmental Conservation at the University of Massachusetts Amherst.

Q: When did you start working on recreational fisheries and catch-and-release?

I’ve been fishing since I was a kid, and picked up fly fishing in 2000 when I was living in the Turks and Caicos Islands. Catching a bonefish on fly was an eye opening experience for me, not only because of the experience itself, but also afterwards when I started digging into the scientific literature to discover that there was little evidence of the best ways to handle and release bonefish, as well as lot of other fish species we target as anglers. At that point, I began moving my scientific career towards assessing how fish respond to catch-and-release, all with the intentions of contributing to best practices that anglers and managers can use to take care of the fish we love.

Q: Tell me about your study. What is the general idea?

This study is focused on evaluating how steelhead on the Bulkley River response to being caught and released in the recreational fishery.

Q: How did the study come to be? Whose idea, etc?

A few years back I was chatting with a friend about the type of science my colleagues and I do, and he asked whether catch-and- release research had been done on steelhead. I started digging into the literature and found that most of the work on steelhead had been done on hatchery fish, and at that point nobody had combined the detailed quantification of the angling event with stress physiology and post-release tracking. Right about that time I was pulled into a healthy debate on social media about air exposure for steelhead, and was quickly immersed in the often- polarized community when it comes to ‘chrome’. Seeing that there were so many people that clearly cared about steelhead and that there was no solid scientific backing to any guidelines specific for steelhead catch-and-release, I felt compelled to help.

Q: When did you really start planning, and when was it put into play?

It was in early 2015 that a few folks suggested that if I wanted to do a catch-and-release study, then I should try to do it on the Bulkley. I started looking closely at the fishery and was pleased to see that it was all native fish. I also started to notice how the Bulkley is really a global mecca for steelhead, meaning that if we could generate best practices for steelhead here, the conservation message would potentially be shepherded by a lot of individuals and groups. I then got invited to visit the Bulkley River and give a presentation at Oscar’s (a local outdoor shop) about the type of catch-and-release research I do. The presentation was super well received and attended by folks from a number of non-government organizations, like the Steelhead Society of BC Northern Branch and SkeenaWild. During this trip, I also met with the Wet’suwet’en First Nation and BC Ministry of Forests, Lands and Natural Resources Operations, who both liked the idea of a study focused on the catch-and-release of steelhead. It was at that point that I started planning the details of the study and looking for funding.

Q: What do you mean, looking for funding? Doesn’t the university pay for you and your research?

UMass Amherst is my academic home and they pay my salary mostly for teaching, while all research projects I do are externally funded. This is pretty standard for most university scientists. For this particular project, I relied on support from a number of different non-government organizations that expressed interest in the research, and that were familiar with some of my other work on catch-and-release. Direct support came from the Freshwater Fisheries Society of British Columbia, Wild Steelhead Coalition, Native Fish Society, and the Steelhead Society of BC Northern Branch, while many individuals and companies provided in-kind support. Really, it is a collective effort, which is great since it means that there was a lot of buy in for the science.

Q: What is the ultimate purpose of it?

The ultimate purpose is to contribute to scientifically validated best practices for the catch-and-release of steelhead.

Q: Has a study like this been done in the past?  Don’t we already know how to handle fish?

Combining detailed measurements of the angling event with stress physiology and post release tracking has been done for several other species, but not for wild steelhead. What is also interesting is that a lot of earlier research on catch-and-release has been done on hatchery fish (particularly for steelhead and other species of trout), and the jury is still out as to whether this data can be extrapolated to wild fish. As for already knowing how to handle fish, if we really knew right from wrong for each and every species, then why do we continue to see such bad handling practices in photos, in fishing shows, on social media, and in company advertisements? Sure there are generalities, like those posted by KeepEmWet Fishing, and these are a great starting point, but we catch and handle so many different species of fish, as well as the same species in so many different settings/ seasons, we are really only getting started with developing a solid understanding of the short and long term implications of different handling practices on fish. Let’s face it, just saying “I practice catch-and-release” is too general since there is a lot of variation in how a fish can be treated.

Q: What about the grumblings that this sort of study has already been in the likes of Washington, etc.?

It seems like some people just like to grumble! Yes, there have been some studies on steelhead, but many of these were using hatchery fish, and some did not examine the potential causes of impairment or mortality. If we are to develop best practices for catch-and-release, rigorous studies need to look closely to discover which elements of the angling event are having the greatest effect, not just in the short term, but also longer after release.

Q: How did you come up with the experimental treatments for the Bulkley River steelhead study?

We spent a lot of time and effort listening to guides and anglers, as well as following social media posts and blogs for various steelhead organizations. We essentially wanted our experimental treatments to reflect concerns of stakeholders. Quite a number of folks said that they just really wanted to know whether the way they handled steelhead was having an impact. Based on input from the angling community, it was also pretty easy to quickly narrow down treatments based on air exposure and handling (net versus tail grab). Some folks also brought up the idea that water temperature could have an impact on how fish respond to catch-and-release, so we made sure to conduct our study throughout nearly the entire season. All of these variables will ultimately be included in our analyses.