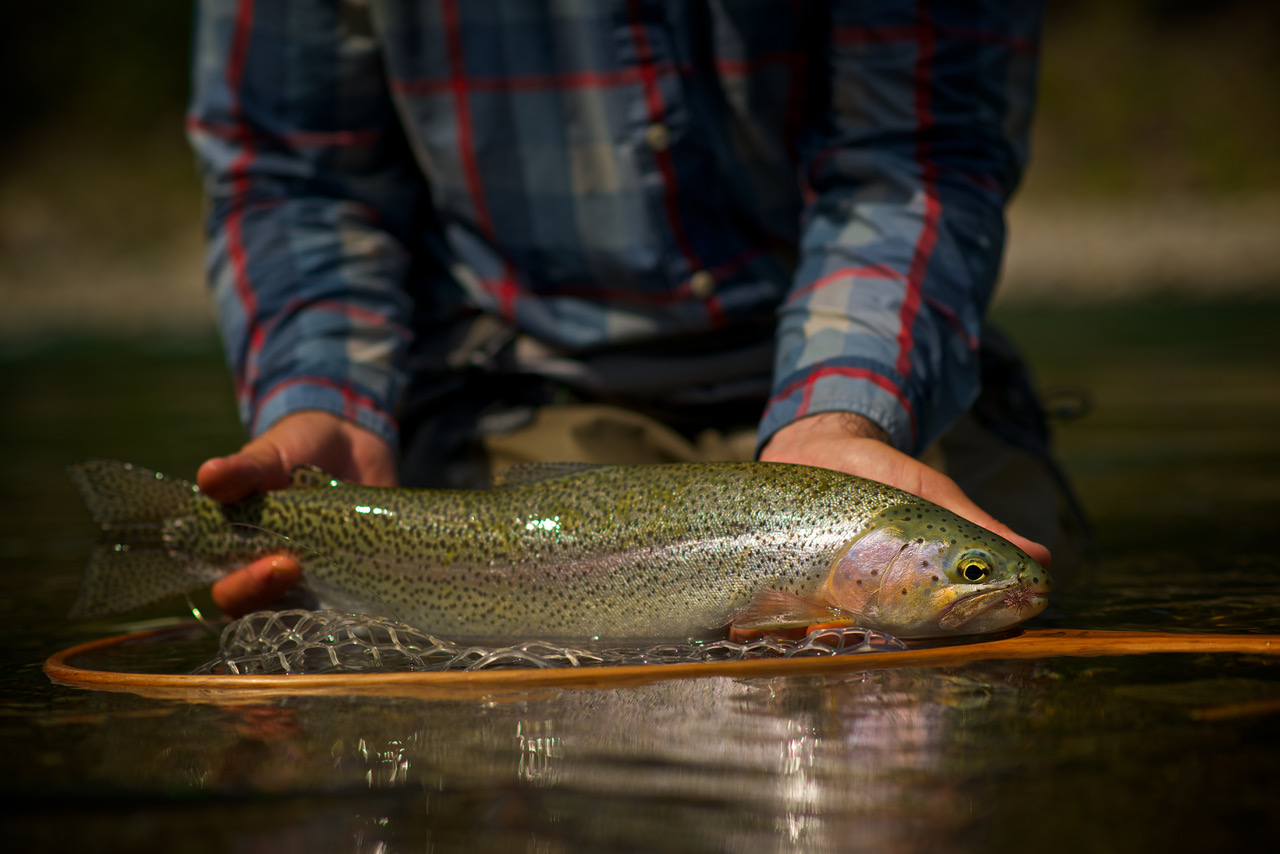 Ever wonder whether it’s time to change flies? Jim McLennan discusses when to tie a new one on.

When should an angler change flies? This question might be asked of guides and fly-fishing instructors more than any other. In some ways the answer is simple. You should change flies when you know the one you’re using is in the right place, is behaving properly, yet is not being eaten.

You’ll know if the fish aren’t eating your fly, but knowing if you’ve met the first two criteria is a little more difficult.

Is the Fly in the Right Place?

If you know for certain the fish’s location, either by seeing the fish in the water, or by seeing it feed on the surface, it’s usually quite easy to get your fly to that spot. But just because the fish sees your fly doesn’t mean it will eat it. The distance a fish will move to take an item of food (or your imitation of that food) varies with water temperature and the size of the food item. When the water is cold (say less than 10C), they won’t move as far as when it’s five or ten degrees warmer. And a fish will move farther to take a large item of food than a small one. If you’re fishing a tiny nymph in 5C water, the fly will have to drift right into the trout’s face. If you’re fishing a size 20 spinner to a rising fish, the fly will also have to come right down the pipe, as it’s simply not worth a fish’s effort to swim four feet to take that tiny speck of protein. Conversely, if you’re fishing big flies – dries, nymphs or streamers – fish will move farther to take them because it is worth the effort in their fishy energy-cost/ benefit analysis.

If you’re only speculating where the fish are – in other words “fishing blind,” things are more difficult because you’re working from an assumption rather than a certainty about where the fish is located. You must try to get the fly as close as you can to the place where you believe the fish is. This is easiest with dry flies because it is two-dimensional fishing; you’re only dealing with the surface of the water. With nymphs the crucial factor of depth is added to the equation, turning it into a three-dimensional game. So along with putting the fly in the water so it drifts on the right course toward the fish’s position, the nymph must also get down to the fish’s depth. This is dependent on a number of things, including the depth and speed of the water, how far above the fish’s lie the fly enters the water, and how fast the nymph sinks.

Streamer fishing usually falls into the category of fishing blind, and getting the fly to the right place mainly means choosing the right water to cast to. One of the great attributes of streamer fishing is that it can work in nearly all water that holds fish. This includes slow deep pools, churning runs, quiet back eddies, and long current seams. Look for places where changes in the water’s speed, depth or direction meet one another.

The depth of the fly can be important in streamer fishing, and though it’s not always necessary that the fly be deep, it’s never a mistake if it is. Sinking-tip lines or sinking leaders, along with weight in the fly or on the leader can help get a streamer deeper, as can a cast directed upstream of the “fishy” water, followed by one or more upstream mends.

Another benefit of streamer fishing is that the fly represents a food item large enough to be worth moving some distance to eat. As a result it’s a good way to search a lot of water quickly.

Is the Fly Behaving Properly?

The second requirement is that the fly behaves in a way that satisfactorily imitates the food item it’s supposed to represent. With dry flies, this generally means having the fly drift with no drag. There are exceptions, but a drag free drift is almost always the first objective. If that doesn’t work, on subsequent casts you can add subtle twitches to the fly, preferably in an upstream direction, as that’s the direction most insects move when they struggle on the surface. This sometimes simply draws a fish’s attention to your fly, but these tiny twitches and jiggles can also imitate the behaviour of insects that move some on the surface (caddis, stoneflies, hoppers).

In order to meet the two requirements of location and behaviour with a dry fly, it’s imperative that you know exactly where your dry fly is. This is often where things break down for the angler. If you don’t know precisely where your fly is, you can’t answer either the question of whether it’s in the right place or if it’s drifting drag-free. This means you don’t

have enough information to know whether to change flies or not. To be sure of your dry fly’s location, attach a tiny piece of brightly coloured strike-indicator yarn (no more than 1/4 inch across) to your tippet about 12 inches from the fly, or use a larger, more visible dry fly in the same position (as long as using two flies is legal where you’re fishing). These are not strike indicators, but “fly locators.” You’ll see the yarn or the larger fly on the water, and it’s easy to find the less visible fly just a few inches away.

With nymphs, having the fly behave properly usually also means a drag-free drift, which is complicated again by the three-dimensional factor of depth. You’ll likely use a conventional strike indicator that’s large enough and buoyant enough that the nymph won’t pull it beneath the surface. When it’s drifting, be sure your strike indicator isn’t racing down faster than the current. If it is, the nymph will also be racing faster than the current, which is exactly what natural nymphs don’t do. Most of the time you’ll need to make mends in your fly line to position the line and leader upstream of the indicator. This allows the indicator to drift downstream ahead of the fly and leader and is the best way of minimizing the chance of drag on the nymph.

Along with telling you when something has interrupted the drift of the nymph, the indicator can also tell you if your nymph is near the bottom. You’ll know it’s down there when the indicator starts moving slower than the water it’s floating on. The velocity of the water is significantly less at the stream-bottom than at the surface, so when the fly reaches

the slower water near the bottom it’s drift-rate slows down, and that makes the indicator slow down also. Watch for this noticeable deceleration of the indicator. If it happens when you have significant drift-time left, you’re in good shape. If it doesn’t happen at all or if it happens just before the end of the drift, the fly needs to get to the bottom sooner. Add some weight to the leader or cast farther upstream to make this happen.

With streamers the proper behaviour is found through experimentation with the retrieve. Try everything from a nymphing-like dead drift (I don’t know why this works, but sometimes it does), to a smooth downstream swing, to slow twitches, to as fast a retrieve as you can muster. And after you’ve landed a fish, try to remember what you were doing when the fish hit, so you can do it again.

Once you know you’ve covered these bases and have achieved these objectives but still haven’t had co-operation from the fish, it makes sense to change flies.

But, as they say on annoying TV commercials, “Wait! That’s not all!” The fly isn’t the only thing you should consider changing. In fact the question really isn’t “When should I change flies?” but rather, “When should I change something?” The “somethings” you can change include not only the fly but also the leader length or tippet diameter if you think that’s putting the fish off. You can also change your casting position. Taking a step or two one way or the other often allows you to reach the right spot more easily and get a better drift.

You can also change methods. If you have feeding fish in front of you, you might switch from a dead-drifting a dry from a downstream position to swinging a soft-hackle wet fly from upstream. If you’re fishing blind with a dry you can switch to a deep nymph or a streamer. If you’re convinced there are fish in the water you’re working, you can run through a number of methods to try to find one that turns the fish’s crank that day.

You can also change your location in a minor way by moving to another spot on the stream. Or you can change location in a major way by going to a different stream. Maybe the fish will be more active there.

Here’s the main lesson: Don’t keep doing what’s not working. Don’t stay in the same place fishing the same fly with the same method, getting the same poor results, for hours on end. This is fly-fishing’s version of Albert Einstein’s oft-quoted definition of insanity. Heaven knows we fly fishers are crazy enough already. We don’t need new ways of demonstrating it.